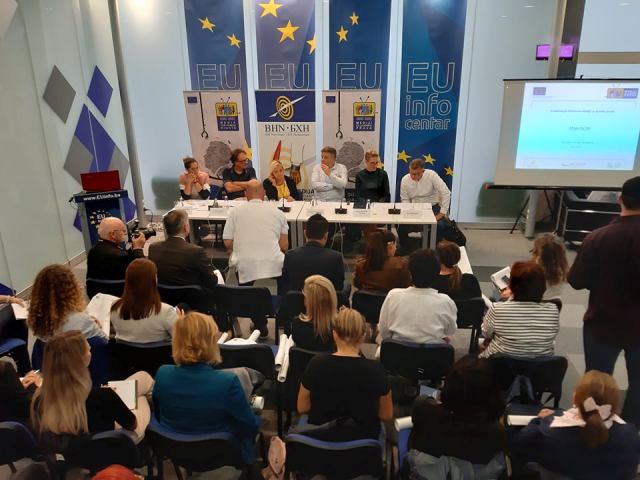 Sarajevo, 04.09.2019. – The Mapiraj.ba platform, which offers online tools for systematic monitoring and public presentation of human rights violations against journalists and all other BiH citizens, especially vulnerable and marginalized groups, was presented today at the EU Info Center in Sarajevo.

This is a project implemented by the BH Journalists Association (BHJA) in cooperation with the European Federation of Journalists and the ProEduca Training Center, with the financial support of the European Union in Bosnia and Herzegovina.

For the first time in Bosnia and Herzegovina, a platform has been created to enable monitoring the needs and interests of both journalists who produce information and media community in general, as well as citizens, civil society and local authorities, who receive information or are informed.

Both social groups violate basic human rights, but they also appear in the role of those who violate the rights of others: journalists through unprofessional reporting and discrimination in media content, citizens through the use of hate speech on social networks and online portals, and government institutions through individual and collective pressure on certain media and journalists.

According to the Secretary General of the BHJA Borka Rudic, the presentation of Mapiraj.ba platform comes in the moment when the public in BiH is focused on the announced Pride Walk, which requires to respect and protect human rights of members of the LGBTIQ community.

„And this is an example where we have become aware of the importance of the media, government institutions and civil society being united in the defense of human rights. It is necessary to understand the importance of the fundamental protection of human rights, and not just look at it from the personal perspective, community or organization we work for ”, said Rudic.

Program Manager of the Delegation of the European Union to BiH Vladimir Pandurevic emphasized the need for cross-sectoral cooperation between civil society organizations, media and government institutions in the promotion and protection of human rights, and their joint education on the standards and policies of the European Union in the field of human rights and democracy.

„All social subjects must respect fundamental human rights as guaranteed above all by the Constitution of BiH, and then by numerous laws, declarations and recommendations. It is quite clear that both the area of human rights and their respect will be part of the negotiations on BiH’s accession to the European Union“, Pandurevic said .

The Mapiraj.ba platform is part of the Media for Human Rights project, which has conducted several studies on the human rights situation of journalists, women victims of violence in safe houses and returnees. Researcher – psychologist Srdjan Puhalo noted that the results for all three categories are worrying and that each of these social groups needs improvement in protecting their rights. Journalists are confronted with the fact that they don’t have paid health insurance and internships, and they suffer various pressures. Women victims of violence, on the other hand, need economic empowerment, and returnees have a range of problems that they face in areas where they are members of a minority, such as unemployment, lack of health care and youth departure, Puhalo said.

„Returnees are an invisible group and it is difficult for them to get a job in places where they are a minority. Most often they are victims of discrimination in infrastructure projects. When it comes to violating women’s rights, research has shown that abuse, shouting, slapping, pushing, threatening, insulting and degrading messages are the most common types of abuse “, Puhalo said.

Sanja Skuletic-Malagic from the Ministry of Human Rights and Refugees of BiH emphasized that there is less and less talk about human rights both in institutions and in the media.

„The key is that throughout the post-war, post-election period, we have devoted ourselves to promoting political parties, and putting human rights and freedoms in the background. It is necessary to abolish discriminatory patterns and harmonize case law so that we can speak about more effective protection of human rights in BiH“, said Prcanovic.

The results of all surveys will be published on a platform, which will be further enhanced in other segments by data that will be collected in the coming period. As announced, a White Book of Human Rights will be published at the end of the year, providing data on human rights violations and good practices for their protection and prevention of discrimination in BiH, which should become a practice and published every two or three years.