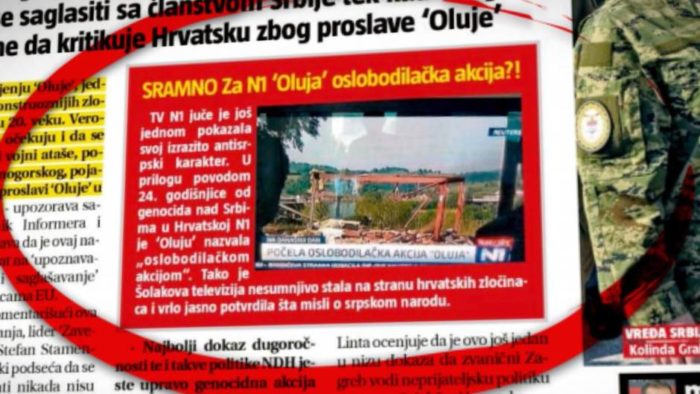 BELGRADE, 05.08.2019. – N1 TV warned on Monday that the pro-government tabloid Informer was manipulating facts by publishing a screenshot with the N1 logo under the headline Liberation Operation Storm begins in an allusion to the Croatian military operation that resulted in the expusion of more than 200,000 Serbs from Croatia in the mid-1990s.

“By publishing a screenshot with the N1 logo and headline Liberation Operation Storm Begins, Informer editor in chief Dragan J Vucicevic has consciously manipulated facts in the customary manner of a newspaper which is a record holder in violation of the code of ethics,” N1 TV said in a statement.

“Vucicevic has taken a tweet by Twitter user @MilanSremac who took a picture of the Zagreb N1 broadcasts to accuse the Belgrade N1 desk of presenting Storm as a liberation operation to the Serbian public. Regardless of the fact that many Twitter users said that this was a broadcast aired in Croatia and that the Belgrade program did not use that formulation, Vucicevic consciously published the manipulation on both his web site and newspaper.

That was followed by comments which included threats against N1 employees, calling us, among other things, Ustasha and directly jeopardizing the safety of our journalists. That same method of manipulation and propaganda was used by media controlled by the authorities at the time that (newspaper publisher) Slavko Curuvija was murdered (during the NATO bombing campaign in 1999 by state security agents),” the statement said.