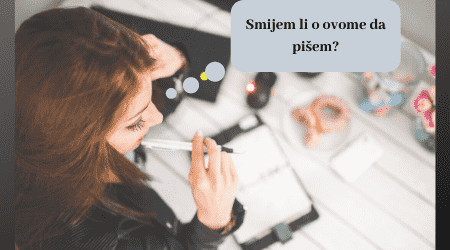 PODGORICA, 09.11.2019. – In the world of employment, journalism is a hybrid profession but also a craft. A blend of practice and theory. Morality and creativity. The combination of psychology, literature, sociology, political science and many other sciences. That is why a journalist should be a person who strives for objectivity, honesty and the one who is seeking for truth.

When young journalists write a story, they are aware that they have no one behind them. Not to protect them nor to encourage them.

Tina Popovic, journalist of “Vijesti” awarded for investigative journalism, over the years, has profiled herself as a journalist for the issues of education and science.

“Complying the Media Law and the Code of Ethics does not prevent civil litigation against the media, threats and attempts to discredit journalists”, Tina said. Why would any young person wanted to report in the public interest if he/she is aware that he/she might be the target of different social categories, she asked.

“For young people, attacks on journalists, both direct and indirect, and threats and attempts to discredit them and physical violence, are certainly not a motivation to educate themselves in this profession, and much less to fight for free speech”, Tina said. “The question is also how many young people who have a degree of journalism really go on to pursue the profession”, she said.

Tina believes that being a journalist working in the public interest means facing the pressures that come from different sides.

“Young journalists need to know that readers’ trust is built over the years, and it is very easy to shake it”, Tina said, adding that trust is built by making sure facts are presented at all times for the benefit of citizens, no matter how small the story seem at the moment.

Tina says there are always those who will prevent the public from hearing the story. Either they do not respond to press questions or claim that they do not respond to questions of “sensationalist” and “yellow press”. Then they try to discredit the reporter by saying he has double standards. Of course, if the epilogue is positive for the population that has had a problem, those who wanted to prevent the journalist from publishing the story will find a way to take over merit just for themselves.

Unfortunately, this is only part of the daily problems that journalists face. Therefore, it is not surprising that most young people seek employment opportunities in the state administration, as evidenced by the fact that as many as 42 percent of young people prefer employment in the public sector. The information is published in “The Youth Study Montenegro 2018/19″ by the Center for Civic Education (CCE). Being a journalist means reporting in the public interest, and a mitigating circumstance for their safety is when doing so from the public sector.

When we speak about young journalists, second-year journalism student Zeljka Zvicer enrolled the journalism triggered by the utopian idea that the media, and therefore journalists, are the drivers of social change, guardians of truth and democracy, which is so much advocated.

Student of Postgraduate studies of journalism Jovana Damjanovic said enrolling in the journalism department was her way of showing “to have no hair on my tongue” and that “the truth will be the most important thing”. Still, through her undergraduate studies, Jovana gained experience through her journalistic practice.

“I realized that it was better to have hair on my tongue and take care of what I was saying, and that the truth would very often have to wait”, Jovana said.

She does not consider students to be protected, nor those who work in the profession.

“We do not always have to talk about threats, though they happen. We are witnessing a few cases only in our country. We can simply deal with the fact that we depend on different people – without a source there is no story and without a story there is no money”, Jovana said.

The text was created within the project “Monitoring for free media” implemented by the Trade Union of Media of Montenegro within the framework of a major project “Judicial Reform: Upgrading CSO’s capacities to contribute to the integrity of judiciary” financed by the European Union, and implemented by the Center for Monitoring and Research (CeMi) in partnership with the NGO Center for Democracy and Human Rights (CEDEM) and the Network for the Affirmation of European Integration Processes (MAEIP)