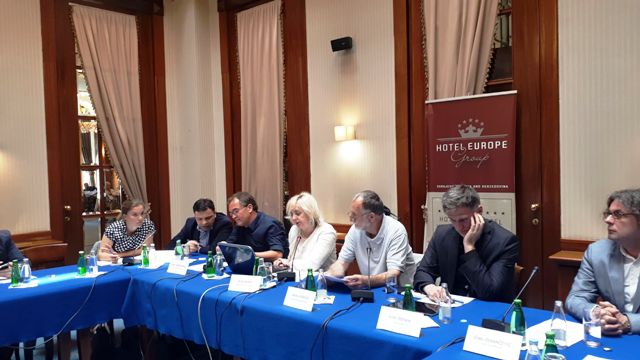 SARAJEVO, 03.05.2019.-Most of the citizens of BiH – 79% of the participants in the survey consider “unacceptable every kind of attack on journalists and the media”, while at the same time as many as 27% of respondents in the Republika Srpska and 17% in the Federation of BiH justify violence. Compared to 2018, the results represent a worrying rise in the number of citizens (by a full 14%) justifying violence against journalists in Bosnia and Herzegovina.

This is only part of the research results conducted by the BH Journalists Association and Friedrich Ebert Foundation on the occasion of May 3 – World Press Freedom Day.

The general secretary of BH Journalists Association Borka Rudić warned that the results of the same survey were much more favorable and that in 2018 only 7 percent of the BiH citizens surveyed supported violence against journalists, at the press conference held today in Sarajevo.

“During 2016, 2017 and 2018, there was a hope that a positive shift was made in the area of understanding media freedom and the necessary protection of journalists, but this research showed that even 21% of respondents approve of violence against journalists and this is a disastrous fact” said Rudić and reminded that the media community “must insist on changing criminal laws at all levels of government and ensure more efficient protection of journalists during professional tasks”.

Speaking about citizens’ trust in the media, Rudic said:

“The media are the others that the citizens believe the most, and this is a fall in confidence by a full 10 percent compared to 2018. The most trusted citizens enjoy the religious communities, and the least politicians and political parties. The survey also showed that citizens’ confidence in NGOs and international institutions is falling. ”

The results of the survey show that citizens believe that the quality of journalism in BiH could be improved by “introducing more stringent criteria for dealing with this profession, improving the economic and social status of journalists and a better education system for the journalistic profession.”

For university professor Enes Osmancevic, it is surprising that citizens have the highest trust in religious communities, and the least in politicians who, as he pointed out, are in symbiosis with religious communities. Osmancevic assessed the worrying fact that in BiH raises public dissatisfaction with the work of the media:

“The attitude of citizens that there is no or that there is partially freedom of the media is a message to media professionals but also to the relevant institutions,” Osmancevic said and recalled a part of the research in which citizens assessed that “media are not thematically profiled” because they are increasingly interested in daily political topics, and the less ordinary everyday lives of ordinary people. He said that, perhaps, the existence of a Chamber of Journalists that would “evaluate the professional competencies of journalists and take care of their licensing” would improve the quality of journalist work.

Osmancevic commented on the work of public services in Bosnia and Herzegovina, saying it was “unacceptable that the sympathizers and party members were their editors”.

He explained that the participants of this research propose “financing of public services from the budget”. If that were to happen, Osmancevic believes, “then it would mean the existence of state service, not a public one.”

“Citizens do not support any form of tax collection, and this is worrying,” he said, concluding that the public space reform in Bosnia and Herzegovina is in the works.

The research on media freedom in BiH was conducted in the period from 27 March to 8 April 2019 by the CATI method on a sample of 506 persons randomly selected, whose age ranges from 18 to 65 years throughout the country.