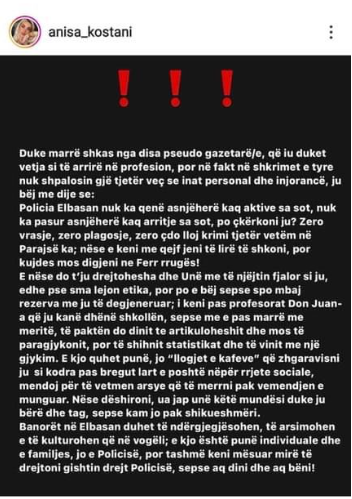 A police officer in Elbasan Ms. Anisa Kostani, attacked the journalists and their professionalism with a status on social media.

On the 19th of August, Ms. Kostani a Police Officer in the Elbasan Police Directorate, publicly insulted journalists with a status on social media, claiming that journalists are muddying the work of the Elbasan Local Police Directorate. Hours after this status, the Head of the Albanian Police, Mr. Gledis Nano, informed the citizens that Officer Kostani has been suspended and an investigation of her actions against journalists has started.
“We clarify the public opinion that the thoughts and personal opinions of Police employees do not under any circumstances represent the thoughts and opinions of the State Police organization, which has a special sector through which it communicates officially with the media and the public. The Albanian State Police is convinced and determined to create a relationship of partnership with the media, based on mutual respect and the truth&quot”, Mr. Nano stated.

On another note, in communication for EURONEWS Albania Ms. Kostani stated that she wasn’t officially informed regarding the open investigation towards her.