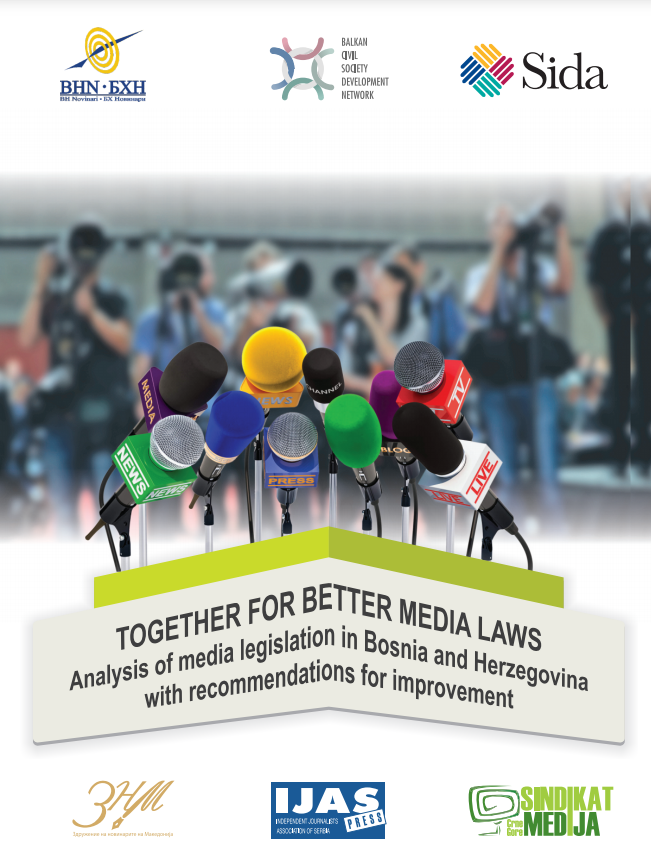 Baseline analysis of media legislation in Bosnia and Herzegovina with recommendations for improvement titled Together for better media laws was made to identify problems in the legislation that negatively affect the freedom of the media and the safety of journalists in BiH. In addition to identifying the problems, the aim is to point out constructive initiatives to amend relevant laws and positive practices that seek to improve the legislative framework in the field of media.

The analysis focuses on the laws at the state level, with a sporadic reference to laws at lower levels to explain the significant differences where they exist. The analysis included the Law on RTV Public Broadcasting System of BiH, Criminal Code, Law on Protection of Copyright and Related Rights, Law on Collective Management of Copyright and Related Rights, Election Law of BiH (Chapter 16: Media in an Election Campaign), the Freedom of Access to Information Act and the Law on Protection against Defamation. In the absence of a law regulating the transparency of media ownership at either the state or Entity levels – as one of the most needed laws to regulate the media market – this analysis looked at the Draft Law referred to the relevant Ministry in early 2019.

A baseline study of media legislation in Bosnia and Herzegovina with recommendations for improvement was created within the project Improving dialogue between journalists’ associations and parliaments in the Western Balkans for a stronger civil sector, conducted by four media organizations from the Western Balkans region. The project is part of a larger project Protection of civil space – Regional hub for the development of civil society, funded by the Swedish International Development Cooperation Agency (SIDA) and implemented by the Balkan Civil Society Development Network (BCSDN).