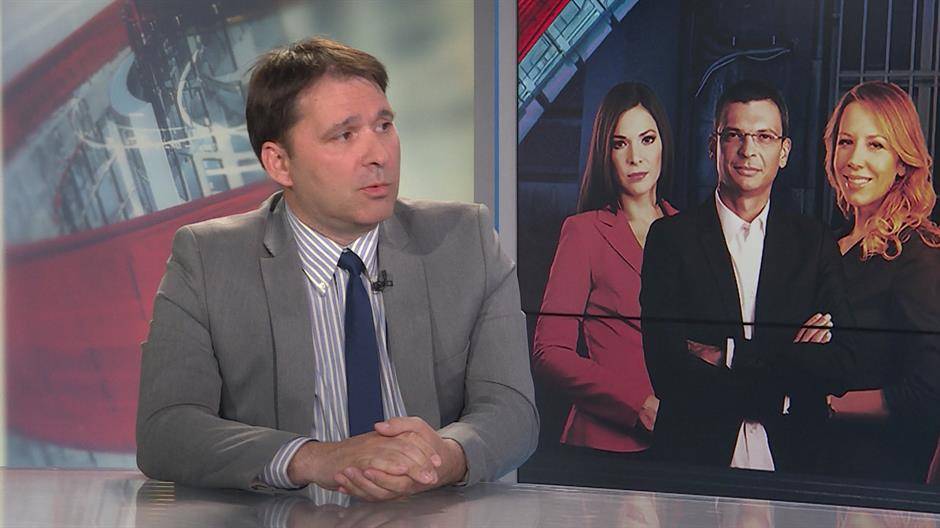 BELGRADE, 20.11.2019. – Igor Bozic, N1 Belgrade executive producer, told Cenzolovka, Serbia’s media watchdog website, on Tuesday that the TV was used to attacks and firing squads form pro-regime Pink television and tabloids, but that such a brutal showdown it had not experienced so far.

He referred to vicious insults on N1’s reporter Miodrag Sovilj which linked his question to Serbia’s President Aleksandar Vucic to the worsening of his health.

“It is shocking when a journalist is targeted and directly accused of jeopardising the President’s health, Bozic said in an interview.”

“They made several special programmes about our reporting on events and interpreted them ill-intentionally. All Insults, humiliations, labels that we work for someone’s political benefit, what is far from being true, were not enough. Now, they added a new element – conspiracy about a pre-prepared scenario to provoke President’s reflex reaction,” Bozic said.

He said one should look into arguments used by a pro-regime tabloid editor, a marketing expert and President’s media advisor – “they all speak about how Sovilj put a phone into President’s face to provoke him to react and push the phone away.”

“That all lift up a level to a conspiracy, and President’s advisor says she will change a protocol, like his life was endangered, only to add later: ‘No, I didn’t say Sovilj was quilty’,” the producer told the website.”

“They also said that neither the President, who was in a hospital then, nor any official linked Sovilj to Vucic’s worsened health. But, a high-ranking official of Vucic’s Serbian Progressive Party (SNS) Goran Vesic directly linked Sovilj, speaking to the Belgrade Studio B TV, as did the editor and expert. And then, on Sunday night, the whole context was explained by the media advisor, again on Pink TV,” Bozic added.

Cenzolovka recalled that N1 had often been a target of smear campaigns in other media too, but a name of any N1 reporter had not been repeated so many times as Sovilj’s.

Bozic added that publishing an old photo from Internet’s ‘cellar’ showed “how those who have never been professionals are ready to destroy the profession.”

He referred to the publishing of a ten-year-old photo of Sovilj who was a student at the time, with the caption saying ‘drunk journalist.’

“They used fake photos showing sex with animals in propaganda before, so that Sovilj, as a teenager, didn’t do that bad. Everyone dealing with media knows how private photos are treated and that it’s clear to what extent the international code was violated. And, yes, that’s dangerous when journalists are accused of asking questions only to be a star on social networks,” Bozic said.

Asked how could N1 staff be safe while doing its job, not only on the ground but in the TV’s building which was a target of unknown perpetrators who threw leaflets into the yard, Bozic said they could not ignore that.

“But what can we do? To bring along soldiers like it’s done in Iraq? We are not in such a situation, fortunately. However, as people whose faces are known from TV, if they are targeted, everyone could recognise them and take ‘justice’ in their own hands. Who would be responsible then? Would those who mercilessly labelled our reporters feel responsible? Is this state capable of always protecting everyone everywhere? None state is, and that’s why it’s important what is said, especially if you hold or support those in power,” Bozic said.

“Vucic’s media advisor Suzana Vasiljevic interpreted to various European and journalists’ organisations a part of the dialogue (between Vucic and Sovilj) as an inappropriate address by a reporter and Sovilj’s sentence ‘let’s not playing around,’ translated as ‘don’t screw around with us.’ To us, this seems more than a usual spin by media advisors,” Bozic said.

He added that Miodrag Sovilj had the support of N1 audience, as well as all other reporters and camera people who were, as Bozic said, often praised by people.

“There are those who swear. That goes with the territory, but anything that crosses that line will be a call for an alarm. Such as those threats we receive on the Internet. We got some on Saturday, we reported them and will see what an outcome will be,” N1’s executive producer said.

Asked if the campaign N1 is exposed to influence the work in a sense that some refuse to talk to N1, Bozic says that a problem exists since the beginning.

“By refusing to be a guest at N1, Aleksandar Vucic has sent a message to other officials that it is not desirable. It has double effects. Firstly, to show that our reporting is not balanced and secondly to protect themselves from hard questions. For them, it’s a win-win situation. For us just a frustration, because as much as we try to get answers at news conferences, that is not always possible, and then the insistence on the answer made Sovilj a national issue number one. That wasn’t either his or our aim,” Bozic said.