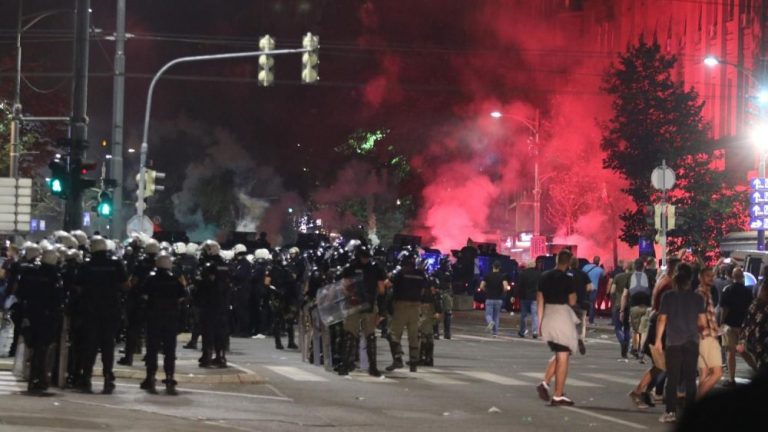 The European and International Federations of Journalists (EFJ/IFJ) are extremely concerned by violence against journalists during the protests currently taking place in several cities in Serbia since 7 July. In two days, we have been informed of at least 14 attacks against journalists and media workers who were on the field to report in the public interest. The Federations condemn the brutal attacks by police forces as well as by demonstrators, and join their affiliates in Serbia, UNS, NUNS and SINOS, in calling on the police to respect the work of the journalists.

Thousands of protesters took to the streets for the second night in a row to protest the way Covid-19 pandemic is being dealt with by the Government of Serbia which relaxed the measures and, reportedly, lied about the number of infected and deceased only to hold elections. The trigger for unrest was president Aleksandar Vučić announcement that a weekend curfew would be re-imposed in order to curb a rise in coronavirus cases.

According to the journalists’ organisations, the most severe case is one of Beta’s reporter, Zikica Stevanovic, who had to be taken to hospital for head injuries. He told UNS what happened last night in Belgrade: “As they (police officers) hit me, I began to fall reflexively, because of the blows, but also to show them that I was not resisting. Although I landed, they continued to beat me. How many of them, I do not know exactly. Judging by the traces of batons from the leaves to the back and head, maybe two, maybe three.”

For the second time in two days, Nova S portal journalist Milica Božinović was attacked by the police despite repeatedly identifying herself as a journalist.

Journalists working for the public broadcaster RTS Milan Srdić and Lazar Vukadinović were physically attacked by protesters in Novi Sad. On that occasion, the cameraman Vukadinović’s hand was injured and the camera was broken, while Srdić experienced verbal insults. In Nis, the RTS journalist team experienced physical assaults and verbal insults, and demonstrators poured water into their camera.

“It is of particular concern is the fact that the police used serious physical force against the journalists, despite the fact that they had previously identified themselves. Bearing in mind that last night’s attacks were more brutal than the previous night, and that the police obviously do not respond to appeals to protect journalists and not to attack them, we interpret this behavior as a deliberate attack on those whose task is to report Serbian citizens on events of public interest,” said NUNS in a statement.

All the attacks were reported to the Mapping Media Freedom platform and will also be notified to the Council of Europe platform for the safety of journalists.

“We call the police and citizens to stand up for the protection of journalists and enable them to work unhindered,” said UNS in a statement.

SINOS recalled that the police must ensure a safe working environment for journalists and media workers and not allow attacks on media houses.

The EFJ and IFJ call on the Serbian authorities to conduct a swift and transparent investigation to ensure those responsible for the attacks are brought to justice.

“Such physical violence against citizens and journalists are intolerable. We urge the police and the Serbian authorities to protect and respect the work of the journalists reporting from the field, who must feel safe to do their work,” said EFJ President Mogens Blicher Bjerregard.

IFJ General Secretary, Anthony Bellanger, said: “We condemn in the strongest possible terms the violent attacks against Serbian journalists for simply doing their job. We stand in solidarity with the victims and fully support our affiliates’ call for a thorough investigation of the incidents. No aggression against media workers should go unpunished”.