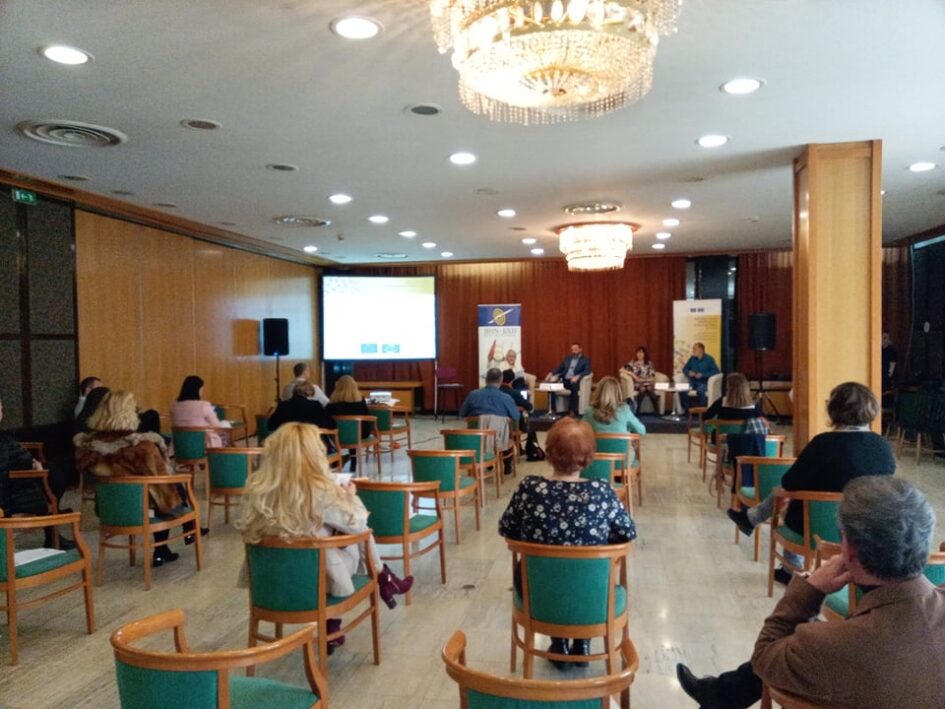 Sarajevo, April 7, 2022 – Journalists and representatives of judicial institutions in BiH are cooperating to a much greater extent today than was the case before. Although cooperation has improved, representatives of the media and the judiciary still face numerous challenges that need to be overcome, especially when it comes to protecting media freedoms and safety of journalists, said the participants at the final conference held today in Sarajevo, organized by the BH Journalists Association in cooperation with the Council of Europe, within the program Horizontal Facility for the Western Balkans and Turkey for 2019-2022 – Freedom of expression and freedom of the media in Bosnia and Herzegovina (JUFREX2).

“This is a unique opportunity for representatives of the media, judicial and other institutions to come together and exchange experiences. It is very important that threats and attacks on journalists are registered and that they do not go unpunished, and we can especially talk about that these days when we see what journalists in Ukraine are facing. Journalists and representatives of judicial institutions in BiH today work more as allies than was the case before, and I believe that this is the greatest value of the JUFREX project “, says Bojana Urumova, Head of the Council of Europe Office in BiH.

“When we were just starting with this project, there was no dialogue between the judiciary and the media. We are now seeing better cooperation and we are really making significant progress. Of course, there are a significant number of political structures that are talking about attempts to pass some retrograde laws in the field of freedom of expression, and these are things that we must constantly warn and react to. This is the essence of the JUFREX project – to support institutions that deal with it to consistently live what is the protection of media freedom and freedom of expression”, said Vanja Ibrahimbegovic Tihak, project manager of the Council of Europe Office in BiH.

The president of BH Journalists, Marko Divkovic, believes that the attitude of representatives of institutions towards journalists has changed significantly, and this shift is most visible when it comes to the police. However, the problem remains the work of prosecutors, who often do not respond adequately to attacks and threats to journalists. Sinisa Vukelic, editor of the Capital portal and president of Banja Luka Journalists ‘Club, agrees that prosecutors’ offices must do a better job.

“We have had several cases where the prosecutor’s office tells us that they do not consider threats as threats. We have come a long way when it comes to protecting journalistic freedoms. Unfortunately, the authorities are doing everything to stifle the few independent media that still exist in this country. In Banja Luka, there is now an attempt to criminalize defamation again and that is really frightening. It is even worse that no one even reacts to that “, says Vukelic.

Lawyer Vlado Adamovic says that everyone is in favor of human rights and freedom of information, but the question is how we achieve that.

“Journalists and representatives of the judiciary can work together, but the professions also tell us that we cannot share views on some things. For example, judges cannot support journalists in their freedom of expression when journalists violate that freedom. However, if we consistently apply the standards of both professions, then cooperation can be very good “, emphasizes Adamovic.

Lawyer Irena Puzic Obradovic emphasizes that a network of people has been created within JUFREX, who are now continuously exchanging information with each other:

“Interprofessional seminars are of very high quality, and on the other hand, through such projects we are becoming more visible in society. We are responsible ourselves when our voice is not heard. The problems that journalists face must be visible, it must be something that is talked about in public. ”

According to the president of the Center for Education of Judges and Prosecutors of FBiH, Arben Murtezic, journalists are one of the most underrated professions in our society.

“I think that through this project in recent years we have managed to overcome a certain garden of natural antagonism between representatives of the judiciary and journalists. The question remains, where next? The position of female journalists, violence in the online space, the base of attacks on journalists within the judiciary are some of the new topics that are being opened “, says Murtezic.

Prof. dr. Lejla Turcilo from the Faculty of Political Sciences in Sarajevo says that it is especially important to talk about new forms of attacks on journalists through the Internet, especially because we have not yet found adequate mechanisms to prevent and sanction such attacks.

“The Internet has brought an unfair competition to journalists in the form of the so-called ‘wild’ portals, and there is a completely anarchic space of social networks in which various forms of wars are fought in public space and attacks on journalists are made. These attacks are very often a systematic destruction of reputation and the goal is always to silence journalists. Those who design and carry out such attacks often have significant political support and are related to the political right”, says prof. dr. Turcilo.

Professor Zarfa Hrnjic Kuduzovic from the Faculty of Philosophy in Tuzla emphasized that many journalists do not report attacks and threats, which is exactly what the attackers are counting on: “Attempts at self-regulation of social networks have proved ineffective in more organized societies than BiH, so many countries are now introducing sanctions for hate speech in comments on portals and social networks. ”

Journalists Arijana Saracevic Helac, Avdo Avdic and Gloria Lujanovic spoke about their experiences with threats and attacks, as well as lawsuits.

“That is the price of our work – to be in court at some point. But our motive is truth and only truth. In this country, the problem is if a journalist publishes a certain document and not the one to which the document refers and who did something illegal”, says Arijana Saracevic Helac.

“It is usually said that a journalist is in the service of the public. I only partially agree with that. I believe that a journalist should be in the service of the truth. It is easy to tell the truth that is popular, but it is difficult to say what the public does not want to hear. When the public turns against you, then it is problematic to write the truth and that is the most difficult part of my career”, said Avdic.

According to Gloria Lujanovic, journalists dealing with topics such as war crimes, corruption and crime are unprotected. “Our judicial system is under political-party control and it is difficult to expect any protection in such circumstances,” Lujanovic said.

As a sign of solidarity with BHRT employees who have not received salaries for two months, the guests at the conference were representatives of this public service, whose existence is seriously endangered. They said once again that BHRT must not be allowed to shut down and that Bosnia and Herzegovina must have a professional public service, which will be financially stable and completely independent of political influences.

Presenting the most important results of the project, the Secretary General of BH Journalists Association Borka Rudic stated that four interprofessional seminars and two webinars were organized in the past period. Some of the topics covered were hate speech and online threats to journalists, secret recording, economic situation of the media during the pandemic…

Contribution to the protection of freedom of expression and integrity of the journalistic profession was made through the availability of free legal aid for at least 240 journalists, as well as the publication of 5 editions of the E-Journalist newsletter, 5 expert analyzes and at least 250 thematic texts, analyzes and reports.

“In the past period, 11 cases were resolved in favor of journalists before the courts and competent institutions related to the rights to freedom of expression and threats through social networks. We have made a set of 5 recommendations and initiatives, strengthened cooperation with the HJPC, and we especially emphasize very good cooperation with the centers for education of judges and prosecutors in FBiH and RS”, said Borka Rudic.