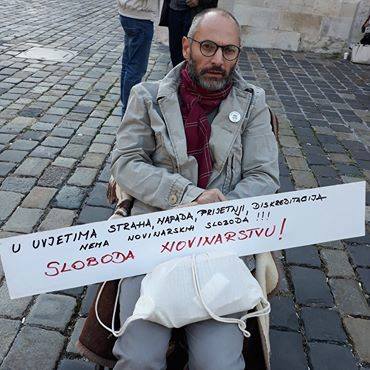 ZAGREB, 22.10.2018. – The Prime Minister Plenković had meeting with the investigating reporter Domagoj Margetić at Friday evening in the Government Palace. He invited Margetić to end hunger strike and he did it. The information was released through the official Governmental Internet pages.

Information about Margetić’s concerns would be forwarded to relevant institutions reads the information, adding the Prime Minister invited Domagoj Margetić to end hunger strike and he did it that evening,

Margetić’s friends confirmed the information to Hina (Croatian News Agency). „After meeting with the Prime Minister Margetić believed most of his claims would be considered and he ended hunger strike“, says Hina.

Investigative reporter Domagoj Margetić started hunger strike 44 days ago due to threats and attacks he had been exposed to. According to information given by the Croatian Journalists’ Association (CJA), all forwarded to the Police, the Ministry of Interior, the Ministry of Justice and the State Attorney, Margetić in last few years reported series of deaths threats, attacks against his property and two physical attacks, one qualified as attempted murder.