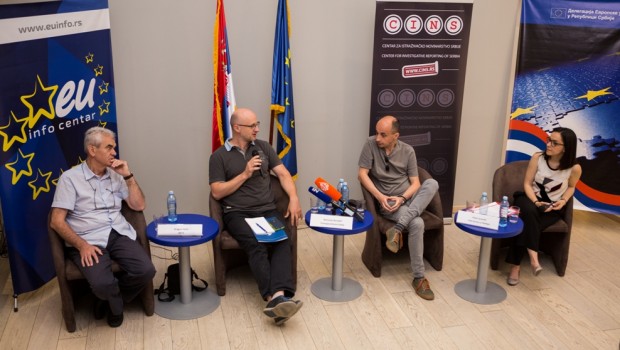 BELGRADE, 13.06.2018. – At a panel organized on 30th may, CINS interviewees spoke about the functioning of Tanjug news agency, manners in which media outlets close to authorities are financed, as well as the pressures faced by independent media newsrooms.

Yesterday, Center for investigative journalism of Serbia (CINS) organized a panel discussion at the EU info Center in Belgrade on the topic of media financing and pressures, i.e. benefits to certain media outlets in Serbia, entitled “Are there privileged media outlets?”

Opening the first out of the three discussions, Anđela Milivojević, CINS journalist, presented a research of more than 3.2 million EUR which the state Export and Insurance Agency (AOFI) paid to company Pink International Company owned by Željko Mitrović in 2017. In four years, AOFI assisted the company with almost 10.5 million EUR.

Predrag Blagojević, Editor-in-chief of the portal Južne vesti said that the state controls media outlets not only by paying them subsidies, or through competition-based financing, but also by not instituting forced collection for excessively large debts.

“On the other side, those who do not owe anything are under constant control. In our case, tax inspectors have made a big out of their scope of competences”, Blagojević explains frequent visits of tax inspectors to this media outlet in the last five years, together with pressures on advertisers and family members.

Nemanja Nenadić from Transparency Serbia said that the Tax administration would have to say something about the suspicion that it does not treat all taxpayers in the same manner, and to explain whether their competences were overstepped in the case of Južne vesti .

In continuation of the panel discussion, Dina Đorđević, CINS journalist, presented a recently published research on the work of Tanjug news agency, which by the end of 2017 received 114.4 million dinars from state institutions. The validity of the Law on this news agency ceased back in the end of 2015, and it is not clear what are the grounds for the Agency’s functioning today.

Petar Jeremić, president of the Executive board of Association of journalists of Serbia and member of the Appeals commission by the Press Council believes that the law needs to be implemented and that the state must decide what will happen with Tanjug:

“The Government passed this unlucky decree on termination of operations of Tanjug, and Tanjug management is now led by what is written in the Decree, and unofficially explains that the decree means that they shall exist until they have completed all their administrative duties (…) However, they have meanwhile concluded new commercial contracts and created new obligations, and that can last forever”.

“We at UNS have never supported termination of operations and closing of Tanjug, but law needs to be observed. Tanjug must be terminated in the current legal form. We also supported finding of a new form and continuation of operating of Tanjug, but under equal and non-discriminatory conditions in comparison to the other two news agencies. In my opinion, these conditions (now) are deeply discriminatory”, added Jeremić.

Dragan Janjić, Editor-in-chief of BETA agency said that the number of contracts the agency concluded with authorities in the several last years has diminished, adding that he does not really believe that termination of Tanjug will really happen.

“When it comes to media, I think it is very important that everything is transparent, because influence to the public is exerted through media. Here we have a state which should make sure everything is transparent, but it actually stimulates an obvious non-transparency. There is an agency which is at the market with other agencies (…) putting the two remaining agencies operating at the market in an absolutely unequal position”, said Janjić.

Another CINS investigation indicated that in 2017 the agency pledged 205 works of art at the total value of exceeding seven million dinars so as to defer payment of its tax debt amounting to 5.7 million dinars and pay it in installments over the next five years.

The third part of yesterday’s panel was dedicated to the issue of allocation of budgetary funds to tabloid media. Thus, according to documents obtained by CINS journalists, the Informer and Srpski telegraf received funds at competitions for co-financing of media content of public interest in Belgrade and Vojvodina, even though they had been issued reprimands by the Press Council for violation of the Code of ethics of Serbian journalists. Since its establishment in March 2016 till the present day, Srpski telegraf has received 12.1 million dinars at 21 media competitions, while the Informer received 10.9 million dinars at 15 competitions since 2017.

Denis Kolundžija, Cenzolovka journalist, said that only in the course of 2018, the Informer and Srpski telegraf received about six million dinars at competitions in Vojvodina only, based on which it may be predicted which media outlets will receive money till the end of the year.

“Until this problem is solved, there will be no one to apply at these competitions”, said Kolundžija.

All four investigative stories produced by CINS were published within the project within which CINS investigated ownership and financing of media using taxpayers’ money, as well as political and other pressures journalists in Serbia are faced with.