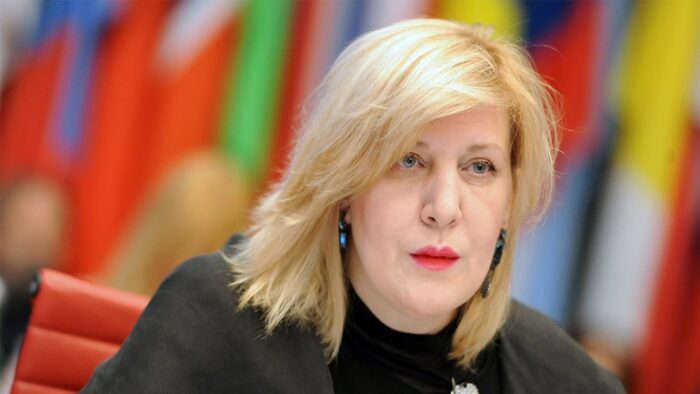 Council of Europe Commissioner for Human Rights Dunja Mijatovic reiterated the issue of publishing the identity of protected witnesses, referring to the latest case in Bosnia and Herzegovina related to Republika Srpska Prime Minister Radovan Viskovic and the publishing of the name of a protected witness at a war crimes trial.

As she stated, effective protection and support for witnesses in the context of wartime-related criminal proceedings is instrumental to the fight against impunity for the crimes committed during the wars of the 1990s in the former Yugoslavia.

However, she warns, in recent days, the name of a protected witness in a war crime case in Bosnia and Herzegovina allegedly implicating the Prime Minister of Republika Srpska has been published in local media outlets, and war crime files containing the names of witnesses allegedly belonging to the Specialist Kosovo Chambers were anonymously transferred to a veterans’ organisation in Kosovo. These developments are unacceptable and raise a number of serious issues to be addressed by the relevant authorities, prosecutors’

“These developments are unacceptable and raise a number of serious issues to be addressed by the relevant authorities, prosecutors” she added.

Many protected witnesses are war crime victims themselves and live in the same communities as the perpetrators. In some cases where witnesses’ names have been disclosed their lives have been endangered and their families threatened, and some witnesses have been ostracised by their own communities because of their testimonies.

She therefore called all politicians and members of the judiciary in the region to take the issue of the protection of witnesses in war crimes cases seriously and to take all the necessary measures to ensure that no witness has to fear for their life when testifying in a war crimes case. Crucially, this includes promptly identifying and bringing to justice persons attempting to intimidate witnesses.

“I also appeal to media professionals not to disclose information about the identity of protected witnesses. In doing so, not only do they violate ethical codes of journalism, but they risk being held criminally responsible”, concluded Mijatović.