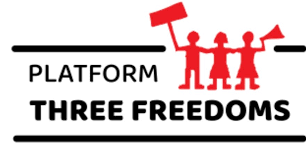 Civil society organizations gathered around the “Three Freedoms” platform are demanding that the prosecution launch an investigation and prosecute hooligans who threatened Brankica Stankovic, editor-in-chief of Insider TV, at sports matches in the previous seven days. Bearing in mind that due to explicit threats made to her 13 years ago, Brankica Stankovic lived under police security, we believe that it is frightening that the prosecution did not initiate proceedings against members of hooligan groups that openly endanger the safety of anyone who points out the danger of their actions.

Prime Minister Ana Brnabic said that the threats against Brankica Stankovic were absolutely inadmissible, and Veran Matic informed the public that he had filed a complaint with the First Basic Public Prosecutor’s Office on behalf of the Permanent Working Group for the Safety of Journalists against unidentified persons for endangering the safety of journalist Stankovic. Despite that, the obligation of the holders of executive, legislative and judicial power is to prove by concrete actions, and not by declarative statements and announcements, that the state is stronger than hooligans. The institutions must not underestimate these threats, especially having in mind that the murders of Slavko Curuvija, Milan Pantić and Dada Vujasinovic have not yet received a final court epilogue.

A 11 – Initiative for Economic and Social Rights

IJAS: Sanction TV Pink because it continues to broadcast live violence on the program

IJAS: Court to sanction the attacker on the journalists of the Nova.rs portal

IJAS: We demand an urgent reaction from the authorities regarding the chanting of Partizan fans against Brankica Stankovic

IJAS, Coalition for Freedom of the Media and AIEC: Ministry of Culture and Information misused the Institution of Independent Media Expert