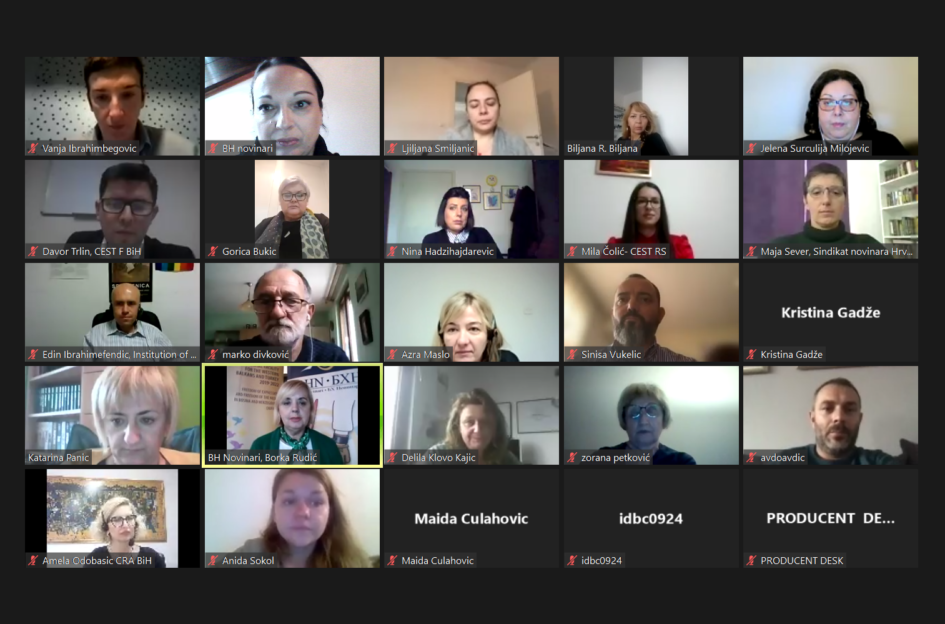 SARAJEVO, November 22, 2021 – Journalists who publish secretly made recordings and photographs of politicians and public officials cannot be held criminally liable if the publication of such recordings is in the public interest. In that sense, it is necessary to harmonize the legislation in BiH with the standards of the European Court of Human Rights and additionally educate judges and prosecutors on the practice of the ECtHR in such cases, concluded the participants of the webinar organized today by the BH Journalists Association.

Secret or unauthorized recording of officials in recent years is one of the most current topics in the media and judicial community in BiH. A large number of lawsuits against journalists and the media are based on the alleged violation of the right to privacy, says Marko Divković, president of the BH Journalists.

“Colleagues who deal with investigative journalism are sometimes left without tools to carry out their tasks because public office holders do everything they can to withhold important information from the public. Unfortunately, these things often end in lawsuits because officials try to present what is in the public interest as a violation of the right to privacy”, says Divković.

According to Jelena Surčulija Milojević, an expert of the Council of Europe, the ECtHR deals with such cases on a case-by-case basis and it all comes down to whether the right to privacy has been violated – specifically whether Articles 10 and 8 of the European Convention on Human Rights have been violated.

“What the court appreciates in cases of lawsuits due to secret recording is whether that topic is necessary for the protection of public health and morals, reputation and rights of others, national security, preservation of territorial integrity or public safety… Even when disclosing some confidential and protected information, if it is proved that it was in the public interest, the ECtHR will rule that the journalist did not violate any law by publishing such information. Of course, not every hidden recording has to be confidential information. For example, what Snowden and Assange did was the publication of protected information, while the Panama Papers are not in that category”, said Surčulija Milojević.

Abuse of personal information, home breach, private correspondence, etc. fall under the right to privacy in relation to freedom of expression. Article 8 of the European Convention on Human Rights prescribes the right to respect for private and family life, home and correspondence.

“A completely different criterion is applied to public figures in relation to private persons. A public figure must suffer a certain level of criticism and a narrowing of his privacy, and as soon as you enter that sphere of the public, you must be aware of that. The ECtHR reduced public figures to four main categories: politicians, lawyers, governments of Council of Europe member states and civil servants paid from the budget. Also, the ECtHR appreciates whether the secretly made recordings were made in a public space or in a private space, where public figures can rightly expect the protection of their privacy”, explained Surčulija Milojević.

Biljana Radulović, a lawyer and associate of the Free Media Help Line (FMHL), mentioned the case of journalist Ivan Žad, who was sentenced to four months probation in Croatia because he secretly recorded his conversation with a politician.

“I think that a politician’s conversation with a journalist can never be ‘private’, and when a politician insults a journalist in that conversation, then it can tell the public a lot about his personality. We have much broader rights given to journalists by the code than those guaranteed by law. As for unauthorized recording in the manner regulated by the Criminal Code, a journalist may be held criminally liable. It is another question whether the courts will have enough hearing to appreciate what is in the public interest in such cases”, says Radulović.

Although the courts in BiH do not have enough practice when it comes to these type of cases, there are still noticeable positive developments in the application of ECtHR standards, said Davor Trlin from the FBiH Judges and Prosecutors Training Center and Mila Colic from the RS Judges and Prosecutors Training Center. They spoke in particular about the law in the Republic of Croatia, which provides for special exceptions in cases where the acts of unauthorized recording were committed in the public interest or in another interest that prevails over the right to privacy of a person.

“If we were to look exclusively at the legal regulations, any secret recording would always be illegal. I think that solutions from Croatia that are in line with the Strasbourg standards should be a model for us when it comes to changes in legislation. In my opinion, the public interest can only be determined by the court, the police and the prosecutor’s office cannot do that. The key word when we talk about the public interest is money, that is, the budget. If you filmed a politician with his mistress on vacation and that vacation was paid for from the budget, then it is certainly in the public interest” says Trlin.

“The ECtHR links the notion of private space to the individual, not to the place. The fact is that every person renounces part of their privacy by going out in a public place, but that does not mean that they agree to be secretly filmed. The Constitutional Court of BiH pays special attention to adhering to the professional norms of journalists and acting in good faith. These aspects are very important for journalists and they can use them in defense in case someone sues them”, said Mila Colic.

Speaking about his own experiences with secret filming, journalist and editor of the Istraga.ba portal Avdo Avdić asked whether he, as a journalist, could be held criminally liable if he received the recorded material from a third party, as well as what happens if a journalist has to commit a criminal offense for the purposes of the story – as was the case with the Diploma affair, when the journalists bought a forged document from a diploma dealer.

“It is indisputable that, for example, I violated the privacy of fugitive war criminal Duško Kornjača because I knocked on his door and filmed him on his doorstep. But now you have one dilemma: public interest in BiH is not the same as the interest of the public in Serbia. Serbia protects its citizens, which is natural, but the question is whether that means that war criminals should also be protected. It is certain that the Serbian authorities will initiate criminal proceedings against me, but it is also in the interest of the citizens of BiH to know where the people accused of war crimes are hiding”, Avdic said.

Siniša Vukelić, editor of the Capital.ba portal and president of the Banja Luka Journalists’ Club, says that journalists cannot be blamed if they come into possession of secret documents that someone submits to them.

“We have to separate serious, investigative journalism from tabloid journalism, which is not interested in any laws or ethics. So the question is whether those who are serious about journalism can get into trouble if they publish something that is really of interest to the public. Some stories that are really worth publishing simply can’t be done without secret recording. We are aware of the risks that this brings, but sometimes there is simply no other way”, says Vukelic.

Maja Sever, a journalist with the Croatian Radio-Television (HRT) and president of the Croatian Media Union, says that in Croatia the law is well defined on paper, but that journalists are often dissatisfied with its application.

“We have complaints about the Criminal Code and the fact that insulting reputation and honor is still part of the Criminal Code. When it comes to unauthorized filming and the public interest, it is essentially something that is a decision of the judges. One of the important things here is the additional education of judges because we are faced with the fact that they simply do not have enough experience and knowledge on topics related to the media environment, from SLAPP lawsuits to what is or is not in the public interest. Depending on the judge, it is assessed what was the intention of the journalist. Secretly filming someone to reveal their intimacy is not in the public interest and I think that is clear. It’s a different topic when we talk about what politicians do ‘under the table’, whether there is corruption and the like,” said Sever.

In cooperation with the Council of Europe, continuing the project Freedom of Expression and Freedom of the Media in Bosnia and Herzegovina (JUFREX), BH Journalists will intensively deal with these topics, which obviously arouse great interest of media representatives and the judiciary, concluded Vanja Ibrahimbegović Tihak, project manager of CoE in BiH. Webinar moderator Borka Rudić, secretary general of BHJA, said that these are controversial topics within which there are often disagreements between the judiciary and the media, and therefore it is necessary to continue working on educating both parties in order to protect freedom of expression and freedom of media in BiH, but also to preserve professional integrity and ethical standards in journalism.