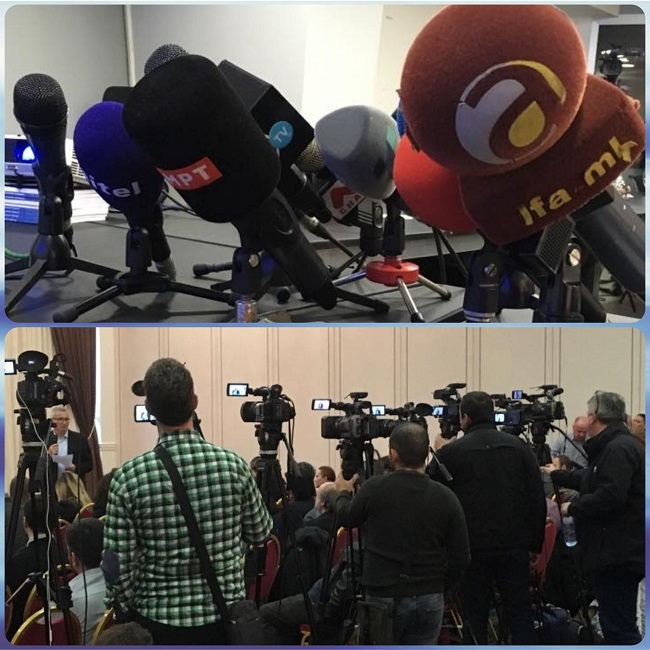 Some of the municipalities allocate funds in the media for media space, but also to inform and monitor their activities, according to the latest data in the media. Municipalities should stop allocating funds for advertising space as a form of hidden subsidies that inevitably lead to influence on them, say experts on the matter.

At least four municipalities last year paid funds in several media outlets for media space and to inform about the regular activities of the municipality. According to the data of the agency Makfax, the municipalities of Gostivar, Tetovo, Kavadarci and Kumanovo had funds for various local commercial media, while the Municipality of Strumica responded that they did not allocate funds for private media in 2017 and 2018.

This practice should stop because it opens opportunities for influence in the media, say experts. Dejan Georgievski from the Media Development Center says that municipalities should stop allocating funds for buying advertising space as a form of hidden subsidization, even if it is not planned and it is with the best intention, because it has the inevitable impact on the work of the local media, including the way they report.

“The Macedonian media market is over saturated and with low finance, that is, far from the possibility of supporting around 120 broadcasters, 15 printed editions and online media (informative or entertaining), of which almost no one knows the number.

There are a series of structural problems – from the size of the available advertising pies to the way they are distributed, through the ambitions and intent of the owners to use their media to support their other business ventures, mainly access to public procurement tenders of all kinds, through the structure of the advertising industry and the needs of our advertisers.

This makes the media vulnerable even to the smallest economic pressure, and under their conditions these are large sums of money. For the local self-government this is a big challenge and a huge temptation. Especially if we know that a good deal of such money is available in the form of agreements for “promotion of the activities of the municipality” or similar formulated conditions, which in the beginning refers to the possibility of influence,” Georgievski says.

He stressed that in order to help the process of consolidation of the market and its reduction in the number and types of media that it could objectively support, the access to all non-market and non-commercial income lines should be eliminated.

Municipalities inform that the funds are mostly intended for media coverage of events and activities related to the work of the municipality, as well as current developments that relate to those topics, which is actually part of the daily work of the media.

“One data for the media, other for the civil organizations”

Two of the municipalities gave completely different data in the answers for the media, and other responses to the requests for free access to information sent by the Association of Journalists of Macedonia on the same subject.

In the data released by the agency Makfax, the Municipality of Strumica responded that they did not give any money for private media for 2017 and 2018, while the municipality of Kavadarci replied that last year they anticipated 2,200,000 denars for TV and radio, and this year they planned 700,000 denars.

We asked both municipalities what is the reason for such differences in the responses sent to the media and the civil organizations.

The Municipality of Strumica now says that in their Budget, both for 2017 and 2018  they provided 1,600,000 denars, funds for payment of current liabilities by invoices, which means that these funds are used for settlement of obligations under successive agreements with the media, and not on pre-planned obligations.

The municipality of Kavadarci has a similar answer, and they say that the different data was given because the questions were different.

However, it is still unclear why there are differences in their answers, because with the questions sent to them for the story published on Makfax, it is also asked for information on all the funds that they have given to the media, how much money they planned for allocation and how much of the funds was spent, and for what specifications these funds were intended. Also, it is asked which media got the funds and how much funds they received, as well as on the basis of which criteria they received them.

AJM says they will file complaints for the case to the Commission for protection of the right to free access to public information.

“AJM sent 81 requests to the municipalities under the Free Access Law asking how much money they provided for media services and journalists in the first half of 2018 and how much they plan to give by the end of the year in order to have an annual cross-section. We analyzed the data, but what we currently know is that more than half of the municipalities are financing local and regional media, although the government has decided to ban public campaigns.

A third of the municipalities still have not responded within the legal deadline and with part of the municipalities, when we compared the figures that AJM and those published by the media, it turns out that that they lied that they don’t give funds to the media, or that they give less than they actually give, as is the case with the municipalities of Strumica and Kavadarci. For this, but also for not responding in time by some of the municipalities, we will file complaints to the Commission, when it will be functional, because since May 2018 it has only two out of five members and has no quorum for work. This prevents citizens from complaining in cases when the administration is silent or gives information that is suspected to be incorrect, ” AJM says.

At the moment, the Commission receives the complaints of the affected citizens but cannot make final decisions because it is not in full capacity.

AJM this year signed a memorandum of cooperation with this Commission to improve their cooperation with the journalists. The President of AJM, Naser Selmani, publicly called on the Parliament to choose the remaining members of the Commission for it to finally be in full composition and functional, but there is still no action.

This activity is part of the project titled “Regional Platform for Advocating Media Freedom and Journalists Safety” funded by the European Union. The content of the publication is the sole responsibility of the AJM and its authors and in no way can be considered to reflect the views of the European Union.