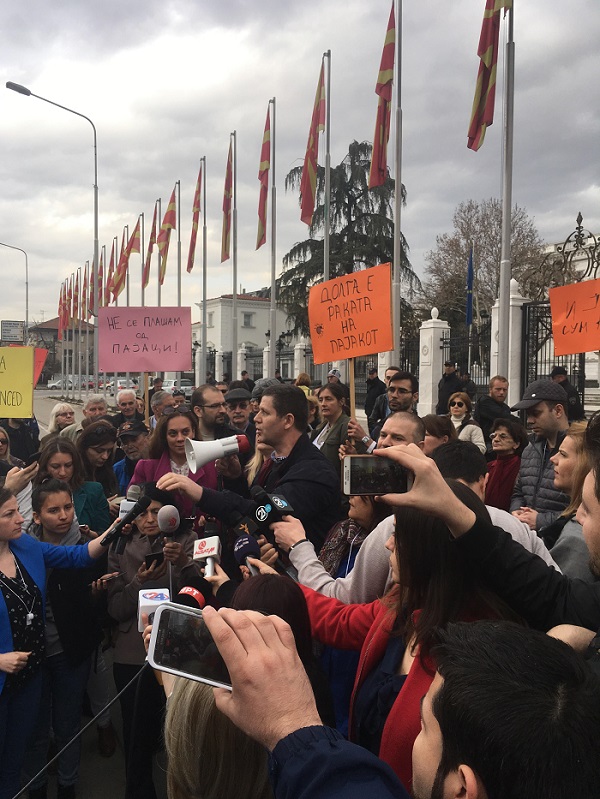 SKOPJE, March 12, 2018 – Today journalists, media workers, representatives of NGOs and citizens expressed their solidarity with the president of AJM Naser Selmani, following the threats and insults sent to him by DUI’s official Bekir Asani and his brother.

The protest was first addressed by the President of the Independent Union of Journalists and Media Workers (SSNM), Tamara Chausidis. She condemned the threats and insults against Selmani and sent a message to the institutions to carrying out their duties, not just issuing announcements as they did for this case.

AJM President Naser Selmani, thanked the journalists that were present at the protest, and stressed out that the government is obligated to silence the abusers, otherwise they become their accomplices. “If they are not silenced immediately, and consequently I am silent, and my colleagues are silenced, do you know who is next in line?! Tomorrow, they will come after you!” Selmani said.

The threats aimed at Selmani were also condemned by journalists’ associations from the region within the Regional Platform of the Western Balkans for Advocating the Freedom of Media and Journalists’ Security. They said that at a time when journalists in Europe either are being killed or keep receiving daily threats, national authorities should take urgent measures to prevent potential killings of journalists. Tolerance and impunity for such incidents serve as an encouragement and motive for future attacks on journalists and media workers.

The messages sent to the protest are more than clear. Journalists in Macedonia will not allow one repressive regime to be replaced by another. Free media will never be silenced!

(The video was recorded by www.a1on.mk)