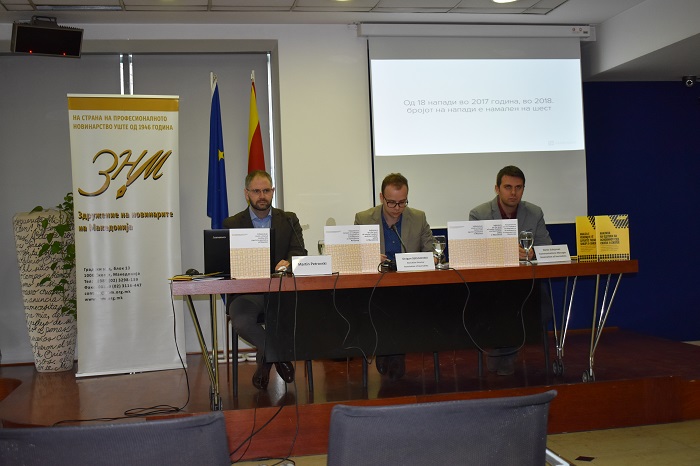 SKOPJE, 25.12.2018 – The Association of Journalists of Macedonia today presented the annual report for the indicators on the level of media freedom and safety of journalists in Macedonia, prepared within the framework of the project: Western Balkan’s Regional Platform for advocating media freedom and journalists’ safety, funded by the European Commission.

In all three main indicators of the report, such are the legal framework for media freedom, the position of journalists in the editorial offices and the safety of journalists in 2018 there are no serious changes in the media sphere.

The director of AJM, Dragan Sekulovski, who pointed out that the government failed to improve the media regulation that was announced long time ago, presented the report. “The amendments to the Law on Audio and Audiovisual Media Services, which were supposed to create better media working environment, were not adopted at the Assembly. We are encouraged that the Government and the opposition are close to agreement and by the end of the year the law will be passed,” Sekulovski said.

“Not only there was no improvement in the media legislation in 2018, on the contrary there was even a certain setback,” said Sekulovski, adding that during the summer holidays, without any debate and completely in a non-transparent manner, the Government adopted the amendments to the Electoral Code and the Law on Financing of Political Parties. “These changes allow parliamentary parties to spend public money to finance media political propaganda during the election campaign and referendums,” Sekulovski said.

According to the AJM, such changes will have a negative impact on the freedom of the media, because it is indirect manner for returning government advertisements, with which the previous government bought the media affection and influenced their editorial policy.

Sekulovski also referred to the work of the courts in the country regarding their handling of defamation and insult claims. According to the AJM, this year the inappropriate application of the media regulation was noted. “There is a mismatched case-law on the Defamation Law. The Civil Court and the Court of Appeal in Skopje reject defamation lawsuits against online media explaining that they are not in the media, while the other Courts of Appeals act in the opposite way. AJM asked the Supreme Court to harmonize the case law, but so far, the court have not stated their position, “Sekulovski noted.

Some improvement this year have been noted for journalists’ safety, but the policy of impunity for the attackers of journalists is still present. “The number of attacks has been reduced by three times, and the first court verdicts have been passed against those who attacked journalists in the past. Unfortunately, the policy of impunity in Macedonia has deep roots. Of the 59 attacks, only two have been solved so far” Sekulovski said, adding that journalists will not be safe until the institutions investigate the complete and last attack by journalists and while the responsible ones are not brought to justice.

The report noted that there were no improvements in either the position of journalists in editorial offices, professional ethics, or the level of censorship. “In Macedonia, almost half of the journalists have lower salary than the state average, which is about 24 thousand denars. The majority of journalists have no fixed-term employment contracts, and 19 percent are temporarily hired as freelance workers. Over 55% of journalists are late for their salaries, “Sekulovski noted.

Finally, Sekulovski appealed to the Government to understand the seriousness of the situation faced by the media and journalists and to restore the media reforms in Plan 18. “Without freedom of expression Macedonia will not make significant progress in the Euro-Atlantic agenda, and the country will remain at the bottom of the world index for freedom of expression, “he said.

The full report can be found on the following link.