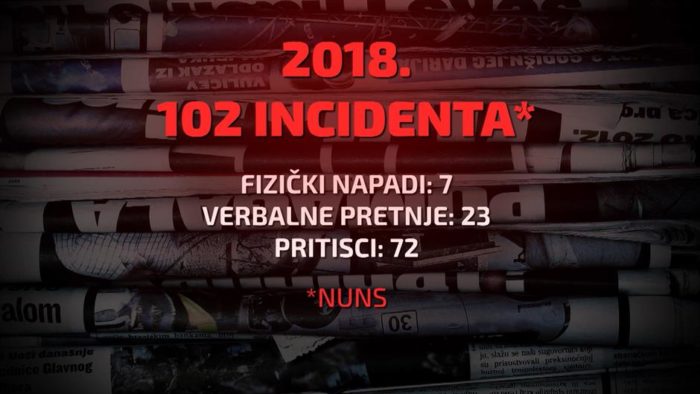 BELGRADE, 30.01.2019. – The Independent Journalists’ Association of Serbia (NUNS) has published a Chronicle of attacks and pressure on journalists in 2018.

The attacks culminated with the torching of the home of Zig Info portal journalist Milan Jovanovic who reported on embezzlement by the local authorities in the Belgrade suburb of Grocka.

NUNS said that cooperation between journalist organizations and state institutions has improved but that the pressure on journalists is increasing.   Of the 102 reported incidents in 2018, seven were physical assaults and 23 were verbal threats. The attackers were punished in just three cases, Marija Vukasovic of NUNS said.

“The impression is that these were mainly cases involving journalists who are more present in the media and we would like it if the other cases of threats and attacks were treated in the same way,” she said.

Internal Affairs Ministry State Secretary Biljana Popović Ivkovic and deputy Public Prosecutor Branko Stamenkovic said that pressure is not a crime. „In simple terms, sometimes what journalists as victims see as danger to their security is not a crime under our criminal code,“ Stamenkovic said.

„We really have to sit down and see what pressure is. It is not an act of crime,“ Popovic Ivkovic added.

Omer Hadziomerovic from the Serbian Judges‘ Society said and Lidija Komlen Nikolic of the Association of Prosecutors that is not the case. They both said that the courts and prosecution do not react adequately to attacks on reporters.