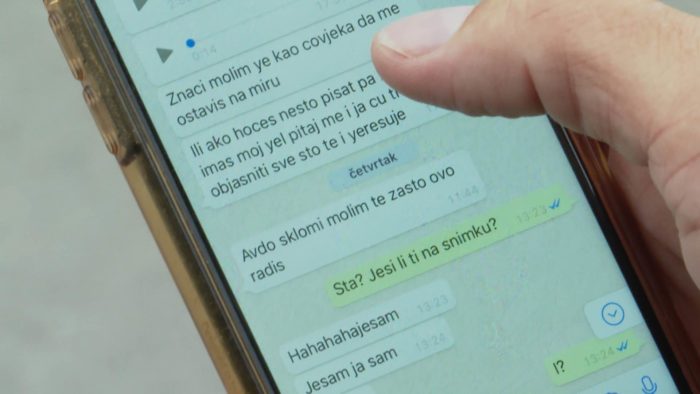 SARAJEVO, 30.10.2019.- Mirza Gacanin’s threats to journalist of online magazine “Žurnal” Avdo Avdic do not stop. After the video message, Gacanin does not stop writing to Avdic. Avdic himself says he understands his reaction because “he is in jeopardy of loosing 23 billion euros he makes through drug trafficking and money laundering”. The messages never cease to be received, and judicial authorities for N1 said they are working on the case, without revealing details.

This is not the last threat addressed to journalist Avdo Avdic by Mirza Gacanin. After a video where he is threatening that they will “search for him in the canals”, Avdic constantly receives messages from Gacanin. In one message, he sends him a video that resembles the slaughter of a ram.

“After my third text, he called the editorial office of Žurnal, wrote e-mails and asked me to answer. I called him from the number in the office to see what he had to say and I talked to him for about 25 minutes. And then I asked him about some of his shady business. It’s a person who has tried repeatedly to pressure me to stop writing because the world banks or banks operating in the EU no longer want to open accounts for him. The business is, according to the DEA, estimated at 23 billion euros, so it is a business of the ‘Tito and Dino’ cartel of which Mirza Gacanin is a member”, said Avdo Avdic, a journalist at Žurnal.

Avdic says he was interviewed by the State Investigation and Protection Agency (SIPA), but not the BiH Prosecutor’s Office. SIPA says they are working on this case.

“Regarding the threats addressed to the journalist of Žurnal, I can inform you that SIPA, in cooperation with the Prosecutor’s Office, is taking measures and actions under its jurisdiction, but at this time I cannot reveal the details”, says Luka Miladinovic, a SIPA spokesman.

We found out that in addition to Avdic, SIPA interviewed several other persons, and the Dutch authorities became involved in the entire case. BiH Minister of Security Dragan Mektic says that everyone must respond promptly because the threats are real and unacceptable. Mektic has a message for the State Prosecution:

“To raise all police agencies, all security facilities in this country, to capture, publicly label and severely condemn this person.”

As in previous cases of attacks and threats against journalists in BiH, judicial authorities are expected to respond. In the meantime, journalists’ associations urge those responsible to adopt amendments to criminal laws in BiH as soon as possible, where sanctions would be clearly imposed in the event of threats or injuries to journalists.

Such provisions exist in the law, but their realization is devastating.

“Even in the current criminal law solutions, when it comes to criminal offenses of endangering security, attacking the integrity of the person, there is a possibility of even imprisonment for up to five years, but we only have 27-30 percent of convictions for attacking and endangering the security of journalists in BiH”, said Borka Rudic, Secretary General of the BH Journalists Association.

Until such laws are amended, journalists will be threatened to do their jobs professionally. Many waters will flow until that happens, and journalists will continue to face constant threats and pressures in BiH.