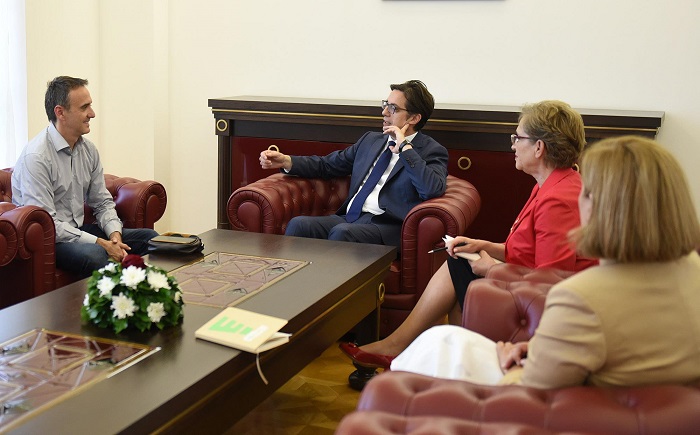 SKOPJE, 20.06.2019 – The election of new members within the Agency for Audio and Audiovisual Media Services (AVMU) and the Public Service Program Council were the main topics of discussion at the meeting between the President of the Association of Journalists of Macedonia, Mladen Chadikovski and the President of the Republic of North Macedonia, Stevo Pendarovski. Chadikovski said that only with independent and professional members within these two institutions it will be possible to unblock and continue with the media reforms in the country.

“The personal composition of the Council of the Agency and the public service will mostly depend on whether institutions will work in the interest of the public, citizens and journalists or they will continue to serve to political parties, as it was stated in numerous international reports,” said Chadikovski.

He asked Pendarovski to put his presidential authority in for a quicker choice of the new members of these bodies.

It was jointly concluded that the joint commitment of the state and the media should be to ensure the fundamental rights and freedoms of journalists in order to implement the professional standards in the reporting.

The head of state, Pendarovski, expressed his support for the work of the AJM and the journalists, and stressed that he will actively strive for bigger media freedoms and transparency of the institutions, which are the main imperative and one of the basic principles of democracy in each state.