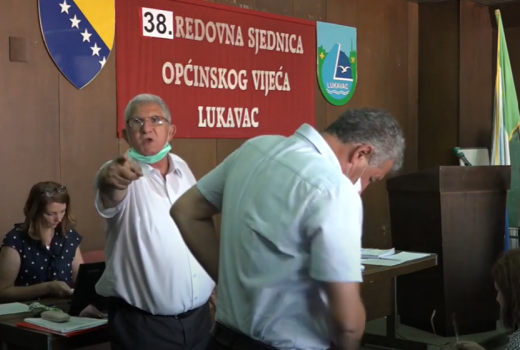 Journalists Association of BiH condemns the attack of the chairman of the Lukavac Municipal Council, Mehmed Suljić, on the RTV Lukavac team. The association says that such incidents are no longer a coincidence, but a consequence of inadequate sanctioning of numerous attacks on media representatives in BiH.

The attack took place during the last session of the Municipal Council, during which, after a verbal conflict with Mayor Edin Delic, Suljic threatened the cameraman of RTV Lukavac that he would break his camera, and said that he should not record a “private conversation” and that he most have permission from the Municipal Council. The Association says most councilors protected the cameraman and provided him support.

RTV Lukavac points out that the live broadcast of the Municipal Council session is a regular practice, and that their team did not provoke such behavior in any way.

The Journalists Association of BiH expects the competent authorities to sanction Suljić, and the law enforcement institutions to react in order to protect the freedom of the journalistic profession.