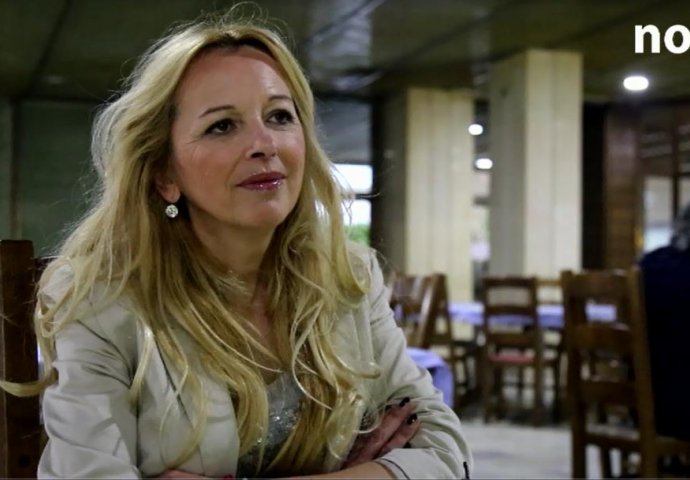 I emotionally opened the first one. It turned out that a post-war profiteer (so called tycoon) had pressed charges against me, because of my TV report broadcasted in “60 minutes” TV magazine (on Federal TV program). He was local powerful figure very close to governing political structures. At the time, I used to work on a story about illegal and criminal privatization process of “Krivaja”, huge pre-war factory located in the town of Zavidovici. My workmates were comforting me and tried to assure me that my story was correct and true and that its content would be easy to prove in court. I could not explain to myself why I had to appear in court and to prove the truthiness of my story, including clear, documented evidence and arguments of the abolishing “Krivaja”, once large and very successful manufacturer. Disempowered and former workers, employees and staff were my witnesses whose story was supported by video reports, recorded throughout empty and silent manufacturing facilities.

However, the rapidity of television machine that we used to work for took me once again to another story in Tuzla and “Blue Hospital”. After posting the story, I once again expressly received another blue and sealed envelope containing new defamation charges pressed against me by the president of
supervisory board of Clinical center in Tuzla. And from one week to another I kept receiving blue and sealed envelopes and at one point, I had over ten blue and sealed envelopes in my drawer. This imposed me with enormous pressure, bearing in mind that I was a female journalist and reporter, but also imposed pressure on the magazine that I used to work for. My workmates were, along with, getting ready to encounter their own legal combats as well.

Did anyone push you to do that: did anyone force you to post and release such story and …?” Truthfully speaking, I did have my own personal issues and often wandered: „What if I lose this time”? What if they reduce my monthly wages (earnings/salary)”? I would then gain more strength for new analytic reports, because I was a group member of rare media house in BiH that, at the time, worked, tended and aimed for better and honest BiH society; a country that would treat every single person equally and country whose laws would be implemented and respected. This has been my professional human duty and responsibility by all means.

In time, I managed to subside and I used to receive blue sealed envelopes making jokes about myself at the same time. We even had a team of top lawyers representing us. However, at certain point of time, our editing office was packed and loaded with law suits and charges pressed against us; our lawyers had consequently to go to pre-scheduled summons (hearings) and I particularly referred to my cases and had an increasing number of cases I had to attend to. This basically was the beginning of period when I actually started to read about laws and cases where our lawyers failed to show up for court hearing sessions, I would eventually end up with a trainee (junior solicitor) and I did not feel comfortable with trainee representing me in court; but not uncomfortable in terms of professionalism; but rather in terms of having strength to fight with heavily corrupted judges. Neither of us had enough and sufficient knowledge about defamation issues.

In most difficult case I had and case that was to be concluded in notime, and instead it extended for few years, I turned out be a clairvoyant.

I was working on a story about newly appointed city mayor in Bihac, who was a left – wing politically biased figure. I managed to detect certain anomalies in his work at the very initial stage of his mandate. Since the format of an investigative story and report required wider and more thorough analysis, including methodological approach at work, I decided to pay special attention to his voluntary work, such as his membership in a prestige institute with his political superior being the chairman of this institute, and the founder of the institute was, at the time, one of the most known living Bosnian male figure, whose origin of property and assets had always been questionable and rather suspicious. It was this person that was perhaps the biggest donor of “New” BiH, but also a
person who had considered himself as untouchable and very much convinced that money could buy him absolutely anything. Everyone used to tell me: „We are going to lose this case“! I was desperate, but still very persistent to that extent that I went through all available archives; contacted
my colleagues and all other associates that could help me with this case, because what one, on one hand, may consider as firm and solid evidence for court proceedings, does not necessarily have to be considered as evidence and arguments by the judge if the same court on the other hand…

However, during the main hearing (summons) my workmates called me and provided me with information regarding specific dark points in life of the person who had sued me. I did not sleep that night and did not feel well, ever since I was informed what kind of a person I was dealing with. Additionally, it was not easy, regardless to statistics, to appear in court, because people would recognize us, they would stop us and would also easily pass their judgment upon us. By the time the summons were
done, entire neighborhood was already familiar with the case. Regardless to one’s efforts to protect one’s family, my family realized what kind of trouble I was in, so at certain point of time, they were even sceptic and to some extent afraid of a local postman, let alone of someone else. Law suits and threats against journalists in our society have had a discouraging effect, but there was no turning back.

If I remember well, it was Friday 2004. Famous summons was scheduled for 9 a.m. that day. I came through, had to go through all checks and spotted our junior solicitor, a member of our lawyers’ team that was defending us. She was standing in front of a court room. I wanted to turn around and leave the building at one point. I felt cheated and so helpless too. But, I said to myself: “let’s lose this case”. We entered the court room. Suitor’s female lawyer was looking right at me and she was slightly smiling. “Who, for the love of God, was I to make defamation stories about such a popular public figure?” she must have thought. I felt disgust inside myself because of everything that was going on. Junior solicitor remained silent and I asked her: „Where is this gentleman? Is he going to show up at all?” Judge Rada or Radmila (I forgot what her surname was) was spinning her golden pen (indeed the pen was made out of gold; not gold – coated pen) and said:” He has been sick and I went to see him and so he signed all required documents”. I asked her if he had signed them with the very same golden pen he later gave her. Her face flushed instantly.

At this moment I felt so confident and comfortable with myself for discovering laws, legal paths and remedies and felt proud of myself for being able to find out that the judge had already been bribed. I demanded to see all medical history and documents that would justify plaintiff’s missing and absence. My legal defense team demanded court trials abruption and adjournment. I silently told her to be quiet about this. There was no documents and I wanted my junior solicitor to demand the exclusion of this particular judge (Rada). In the end, I approached her and told her about morbid details from plaintiff’s past, which I had previously decided to use as “the ace from the sleeve”.
I also told her in her face about what I thought about her (that she was bribed to the bone), because I reckoned that juridical system and journalism must have common and mutual goals. The case remained inactive for a while, but it was later appointed to, according to my personal opinion, most honest and righteous judge, namely Judge Srdic, who happened to be brave enough and had the audacity to conclude this case.

In the meantime, every one of us used to work by applying the same dynamics, bringing stories about the occurrence of corruption, crimes, suspicious privatizations etc., and we all had our little battles inside ourselves because of constant pressure “imposed” by blue and sealed envelopes. It was also interesting that the plaintiffs would sometimes quit and give up right in the middle of court hearings. The absurd of this situation was that I have often been invited to provide various informa tion to courts at different levels that would use these for their particular and special cases and I was sued for identical cases a decade or even two decades ago.

(This article has been published in the 65th edition of bulletin E-journalist; the author is a longtime journalist at Federal Television-FTV from Sarajevo)