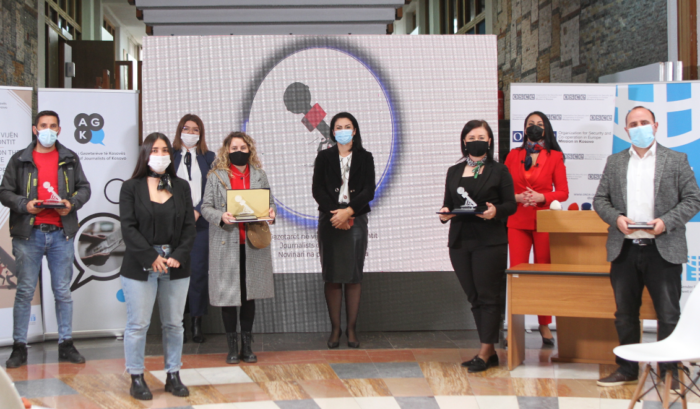 PRISTINA, 20.11.2020 – Under the slogan “Journalists on the frontline”, the Association of Journalists of Kosovo (AJK), in cooperation with the OSCE Mission in Kosovo (OMIK) and the United Nations Entity for Gender Equality and the Empowerment of Women (UN Women), today held the annual awards ceremony of journalism.

Jeta Xharra and Visar Prebreza from KALLXO.com, were awarded the “Ibrahim Rexhepi” Journalism Prize for Economy, which was supported by the OSCE Mission in Kosovo, headed by the Head of Mission, Ambassador Jan Braathu.

OMIK also supported two awards for the “Two best pandemic stories”, that were awarded to journalist of the Radio Television of Kosovo, Jehona Zhitia and the journalist of Klan Kosova, Arbreshë Uka.

While, for the “Women’s Empowerment Journalism Prize”, Donika Lamaxhema was awarded for her story published in Kosovo2.0, an award given and supported by the Head of the UN Women Office in Kosovo, Ms. Vlora Tuzi Nushi.

The annual journalism awards ceremony was moderated by Gentiana Begolli Pustina, who, among other things, expressed gratitude to our colleagues for the devotion given during this year.

“Unfortunately, in an empty seated area and a dimmer atmosphere than in the previous years, we shall begin the awarding ceremony of the Journalism Prize for Economy “Ibrahim Rexhepi”, as well as the other traditional award for Women’s Empowerment. Even though it is a tradition for these awards to bring joy and optimism to our community, for they appreciate journalists’ annual work on particular topics, unfortunately today not all of the award winners are with us in here – one of them is quarantined. This is a living proof that our colleagues have endangered themselves and their families so they wouldn’t only comply to their duties, but also by accomplishing their mission, which is the right and on time informing.”

Ambassador Braathu also addressed the participants through a video, congratulating the journalists for their work.

“We commend the journalists that follow the trail of public money spending and serve as watchdogs over events that shape the interactions between the economy, politics and the society in Kosovo. If anything, I think we need more economic reporting in Kosovo. Economic reporting not only about the things that should be better but also about some of the things that are good, in those that we do see progress. For example, in the private sector. The pandemic has also come with its set of challenges for the media community in Kosovo. Some of these challenges however, are challenges that journalists have faced for a long time. They are nothing new. Taken together they add up to an escalation that illustrates how hard it is to serve accurate and timely information to the general public.”

The journalists were also thanked by the Head of the UN Women Office in Kosovo, Vlora Tuzi Nushi.

“Just like doctors, the journalists have played one of the most important roles in saving lives, because if we had not received information from you, we would not have known how to take care of ourselves, nor what is happening because we were all isolated without being aware of the great risk that was threatening us. I appreciate your work in the field and the challenges you have faced, all the more so given the political changes that have taken place, so you were right on the front,” she said.

Today’s event was held in honor of World Press Freedom Day, which is celebrated on May 3, but due to the situation with the COVID 19 pandemic, the event has been postponed to November.