Years dedicated to the journalistic profession, as in every profession, leave scars that the followers of the public word try to overcome, aware that time will not erase them. Journalist of Daily “Vijesti” Jelena Jovanovic still remembers the first threats, although, as she recalls, more than 11 years have passed since then. From then until today, the list of received threats is getting longer.

– Still, I can’t answer how many there were, because I’m really trying to forget all the ugly things. The court epilogue was given to almost all cases and all of them have been finalized – says Jovanovic.

One of the attacks on Jelena was recorded in 2021, during which 27 attacks/incidents to the detriment of journalists and media in Montenegro were registered. At the same time, the trend of threats received by journalists through social networks has been maintained. It is worrying that during 2021, there was an increase in physical incidents, which together took on rather gloomy outlines.

Jelena is one of the few journalists who lives and performs her work duties under police protection. The changed way of life and functioning raises the question of whether it makes it impossible for her to engage in investigative journalism.

-Life accompanied by the police means that they are simply a part of my life – together we go to work, to the field, to hiking, to congratulations, funerals, in a cafe, cinema, birthdays, protests, conferences, we walk together … with that difference if I am not in a public place (coffee bar, beach, mountains …), when I get to the location where I will stay, they are waiting in front of the room. I am forbidden to use my car, which means that at no time, when I am out of a “safe” location, I can be alone, even if it means going to the cigarette shop alone or to the hairdresser. That significantly complicates life and work, because some sources from the security services do not want to see me as long as I have security, but I somehow manage to overcome this problem as well – Jelena explains.

She is under the protection of the police precisely because of the work she does and the fact that her signature as an author is under numerous articles that deal not only with high-level corruption research, but also with the activities of criminal groups. One of those articles endangered her safety.

– Due to the topics that are in my focus, and that is the dominant research of organized crime, threats have been constant for years. Maybe that’s why I don’t take them seriously sometimes, at least not as much as I should, which is wrong. July and August 2020, however, were a little different. Honestly, a little more stressful – very dangerous information started coming to me. I have not heard in any version that I will survive what is in store for me, which is why I shared them with the members of the Sector for the Fight against Organized Crime. On the same day, I was assigned police security. At the beginning of September last year, if I remember correctly, instead of the employees of the Security Center Podgorica, who had been guarding me until then, I was assigned twenty-four-hour security, that is, members of the Sector for securing persons and facilities, with which I have been living almost since then – explains Jovanović. 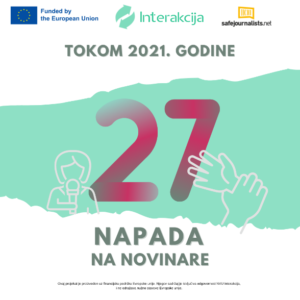 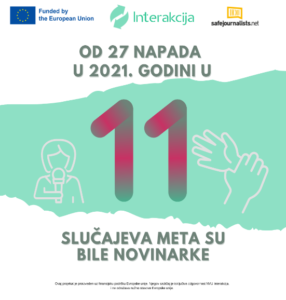 And what actually happened to Jelena?

On July 28, 2021, the journalist, through a lawyer, received a letter signed by detainee Mario Milosevic, in the form of a reaction to the published article. The lawyer sent an e-mail to the official e-mail address of the journalist and the editorial office, which she called a demant, in which the suspect in the two murders, among other things, states the address where the journalist lives, insinuating that Jovanovic is paying off the apartment by writing articles about him. The journalist, who is also a witness to the murder for which the prosecution suspects Milosevic, interpreted the allegations as serious threats and an attempt to intimidate and discredit her, bearing in mind the fact that information about her address is not public. That is why Jelena filed charges against Milosevic and his lawyer for endangering security.

However, that was not enough for the Basic State Prosecutor’s Office in Podgorica.

– After analysing the entire case file, it was assessed that there is no reasonable suspicion that Milosevic and Karadzic committed any crime for which they are prosecuted ex officio – it is stated in the answer of the Basic State Prosecutor’s Office in Podgorica to our questions.

– I hope that we all do our job the best we know how, including prosecutors, although practice shows otherwise. I will not comment on their decision, but they took responsibility for my life with it – Jovanovic commented on this decision of the Prosecutor’s Office.

She believes that the competent institutions are not doing enough to recognize and sanction attacks on journalists.

– In the previous assembly of the Government, we even had a minister who did not make enough efforts to protect journalists and photo reporters, which is inadmissible. In addition, it seems to me that prosecutors have qualified attacks on journalists as minor forms of crime or minor crimes. In that way, instead of preventing attacks, it is as if they are giving the wind in the back to the attackers – Jovanovic thinks.

That is why she believes that a lot needs to be changed, primarily public awareness of the importance of journalistic work, because journalists are increasingly exposed to threats, persecution, attacks…

– What is not talked about are attempts to discredit. However, I am glad that despite all that, I notice that it does not significantly affect our freedom – says Jovanovic. 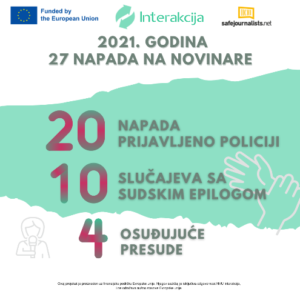 Despite threats and attacks, Jelena is determined to continue her work in journalism and criminal investigation. It has a clear message for colleagues who recognize any kind of threat.

“They must not ignore even the most innocuous threat, nor accept them lightly, because that can have far-reaching consequences. So, we always have to report everything. It also happened that I did not report threats. That is a mistake I made in the beginning and I consider it wrong now. We have to report everything, because that is the only way we will end the attacks on us”, says Jovanovic to his colleagues.

Of the 27 recorded cases of incidents and attacks on journalists in 2021, 20 were reported to the police or the police acted ex officio, and 10 received a court epilogue.

Convictions have been handed down in four cases. Sentences range from a suspended sentence of 4 months to 2 years in prison with a probation period of 2 years to 3 months or 10 months in prison, as well as a restraining order and compulsory treatment in a psychiatric institution.

The project “Stop Violence Against Journalists” was supported within the support program “Safejournalists.net”.