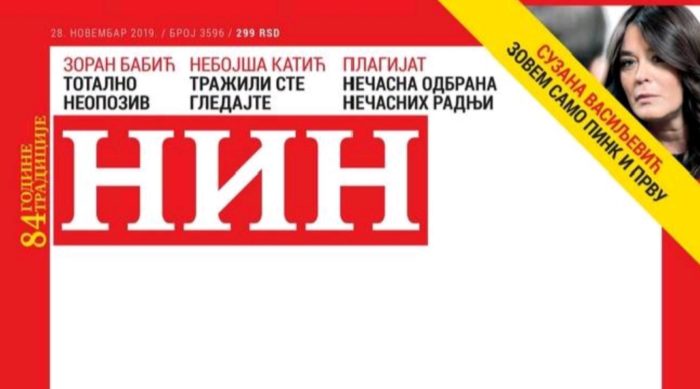 BELGRADE, 28.11.2019. – The Belgrade NIN weekly appeared on stands on Thursday with an almost blank cover page which drew an avalanche of criticism after announced on social networks on Wednesday because it showed an old photo of Serbia’s President Aleksandar Vucic at arms fair with a sniper barrel pointing at him, N1 reported.

The cover page is said to have been especially sensitive because Serbia is a country where Prime Minister Zoran Djindjic was assassinated by a sniper in March 2003.

“Although the cover page is changed the content of the ‘Arms affair: Who is destroying Krusik’ story remains untouched,” Ringier Axel Springer, NIN publisher, said in a statement.

The state Tanjug agency said the photo wasn’t theirs but cropped to eliminate the two-thirds of the original.

The agency said it had never published such a photo, but that NIN took only one frame from the original, focusing on the sniper pointing at Vucic.

NIN’s editor-in-chief Milan Culibrk said later on Thursday the weekly would be printed with blank cover page in its further editions to avoid “someone’s talks about the photo.” He added the editorial board made a compromise with the publisher who saw the photo as inappropriate, “what it doesn’t seem to us,” to publish a blank cover page. “If the photo bothers you, I hope the text will trouble you even more,” Culibrk told Insajder.

He said it was not the first time. “Go on with doing that. While you are pointing a sniper at me, I’ll try to point a tip of a pen at some part of Serbia where we will build new roads and factories.”

“I agree with NIN’s headline in every sense. Firstly, they promoted an excellent sniper. Secondly, it shows in what kind of ‘dictatorship’ we live,” Vucic said alluding to the opposition accusation that he ruled as a dictator.

Prime Minister Ana Brnabic thanked the publisher for showing the responsibility by changing the cover page, but also to the public reactions, including Vucic’s opponents.

However, the Union of Serbia’s Journalists (UNS) described the withdrawal of the original cover page as “an act of censorship,” but added the publishing of the cropped photo was an editorial mistake.

UNS said the censorship showed that the publisher suspended the editorial right to independent policy, regardless of the publisher’s right to protect the company’s reputation.

The move prompted a Twitter exchange between Brnabic and Tanja Fajon, an MEP and Chair of European Parliament Delegation to Serbia.

I agree that freedom of media means also not to spread hate or violence, but we MUST BE clear: IT IS ESSENTIAL TO CONDEMN SUCH IRRESPONSIBLE JOURNALISM BUT WE SHOULD not MAKE THE MISTAKE TO SAY THIS IS a consequence of the freedom of media https://t.co/D0enZd6rax