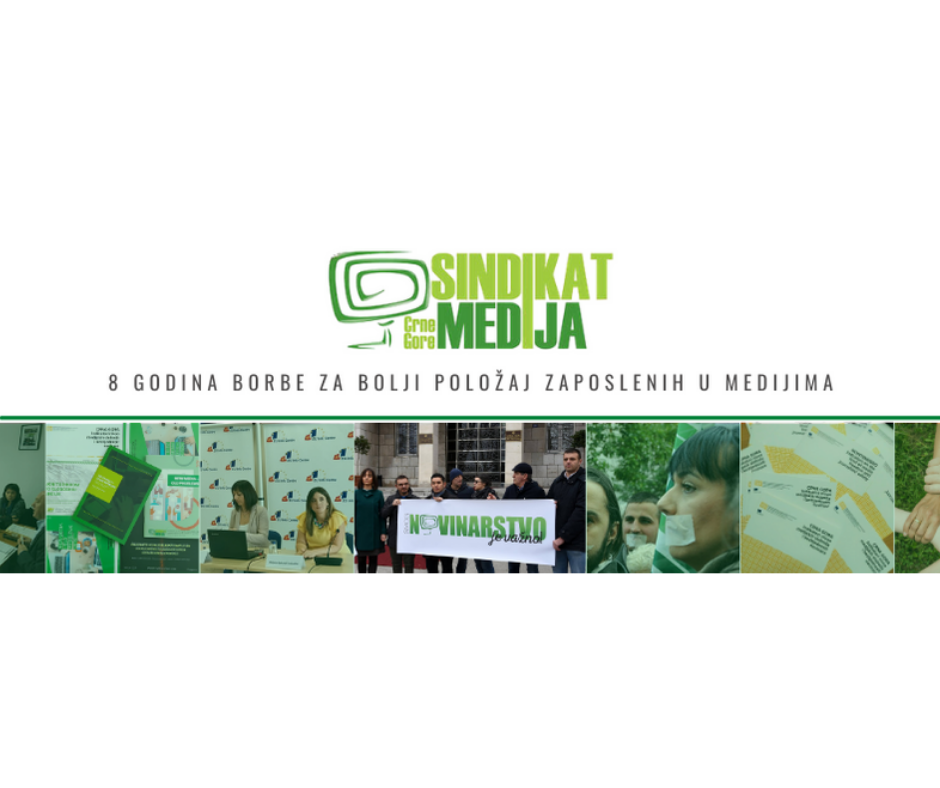 PODGORICA, 13.04.2021. – Trade Union of Media of Montenegro (SMCG) is marking eight years of struggle for a better position of journalists and media workers and for the improvement of professional standards and freedom of the media.

On the occasion of the birthday, we are introducing a new service – Know your rights, and we are also launching a new website of the organization.

SMCG was founded on April 13, 2013 in Podgorica as a branch union of the Union of Free Trade Unions of Montenegro (USSCG). Since then, about 600 members from more than 20 Montenegrin media have joined the SMCG, which makes up almost half of all employees in the media sector in Montenegro, so SMCG is the largest media organization in the country. SMCG is also a member of the largest international journalistic organizations – the European Federation of Journalists (EFJ) and the International Federation of Journalists (IFJ).

During the past eight years of difficult and challenging struggle for a better position of media workers in Montenegro, we have implemented a series of public campaigns, actions and protests in order to improve the economic and social status of media employees, solve attacks on journalists and improve professional standards of journalists and media workers. We also provided free legal aid and legal advice to hundreds of our members and other media workers. Thanks to our proposals in the process of amending media laws, the autonomy and independence of journalists within newsrooms has been improved. SMCG is also the first organization in Montenegro to run the most up-to-date base of attacks on journalists and media workers for years, propose changes to the legislative framework and make concrete proposals on how to increase the protection of journalists. In 2017, SMCG launched an initiative to adopt a new Branch Collective Agreement for the media in order to improve the labor rights of journalists and media workers and increase their salaries, but, unfortunately, negotiations eventually failed because employers were unwilling to accept our proposals. We will renew the initiative in the coming period because the position of media employees is still at an unsatisfactory level in relation to the role that the media have in Montenegrin society.

In the past eight years, we have conducted dozens of researches on the media scene in Montenegro, the position of journalists, the application of media laws and attacks on journalists, which represent a valuable database on the state of media freedom and are often cited domestically and internationally.

Our vision is Montenegro as a democratic society in which media employees work professionally in the interest of citizens and who are satisfied with their material status, where their labor rights and professional freedoms are respected and where they objectively inform citizens, without fear of being pressured by their work. Salaries of journalists and media workers are generally still below the national average, some work illegally and without adequate contracts and their rights are often violated. Due to all that, the biggest challenge in the coming period remains the improvement of the material status of employees in the media, to which SMCG will give its full contribution. Also, big problems remain censorship and self-censorship, various pressures on the free work of journalists and attacks on journalists, and all this will continue to be the subject of our organization’s attention.

On the occasion of the eighth birthday, SMCG is launching a new service – Know your rights. We have expanded the legal team, which will, every other week, except for labor rights, answer the professional dilemmas and questions of our members. We invite the membership, but also the interested public, to ask questions to our lawyers via social networks, e-mail or telephone.

We will publish the answers to all these questions and dilemmas on the new website, where our associates will also publish thematic articles in the field of journalism and media.

We call on all journalists and media workers in Montenegro to be in solidarity, professional in their work, to resist pressure and to work together to improve their position because united we can do a lot and polarized, as we are now, we become easy prey to various influences while our status is not significantly improving.