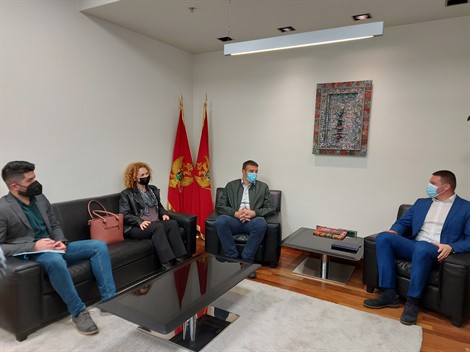 PODGORICA, 16.04.2021 – Criminal Code of Montenegro should be amended to better protect journalists and media workers, it was said at the meeting of representatives of the Government and the Trade Union of Media of Montenegro (SMCG), which was held in the building Government of Montenegro. The meeting was attended by the advisors to the Deputy Prime Minister Filip Adzic and Miloš Perišić, as well as the Vice President of the SMCG Radomir Krackovic, the President of the Trade Union of Radio Television of Montenegro, Jadranka Drobnjak, and the expert associate Drazen Djuraskovic.

The Vice President of the SMCG, Radomir Krackovic, informed the representatives of the Government about the activities of the SMCG, whose focus is on improving the socio-economic position of media employees, but also their safety. Krackovic referred to the problem of frequent attacks on journalists, three of which occurred recently, pointing to the problem of impunity, ie the fact that the most serious attacks remain unsolved. That is why, as he said, SMCG supported the initiative of the Human Rights Action (HRA) to amend the Criminal Code to protect journalists, by prescribing new crimes for attacks on journalists, but also by advancing the penal policy.

Advisor to the Deputy Prime Minister Filip Adzic said that the media are an important factor in every society and that the Government should make a key contribution to improving the environment in which journalists have been working for decades. Speaking about the difficult position of the media, Adzic also referred to the annual reports of international organizations, which clearly speak about the decade-long lack of media freedom in Montenegro. Adzic emphasized that the first democratic change of government in the history of Montenegro is a good starting point for the state to address the problems of journalists and media workers in the coming period, but also to solve previously unsolved cases of attacks on journalists.

Considering the models of amendments to the provisions of the Criminal Code of Montenegro, the interlocutors noted the bad situation in the media and agreed that penalties must be tightened to improve the safety of media employees.

The president of the Trade Union of RTCG employees, Jadranka Drobnjak, informed about the current problems that the workers in the Public Service have, the debts of RTCG towards them and, in general, about the current situation in that media house.

Representatives of SMCG also presented the current activities when it comes to the announced changes in media legislation and the development of the Media Strategy of the Government of Montenegro, which, among other things, they discussed with the Minister of Public Administration, Digital Society, and Media, Tamara Srzentic.

The meeting was also an opportunity to discuss the problems of employees in the local media, and especially the financial sustainability and political influences on local public broadcasters.

Adzic expressed the openness of the Deputy Prime Minister’s Office to all proposals concerning changes to the legislative framework, which will ultimately mean an improvement in the conditions in which journalists work.