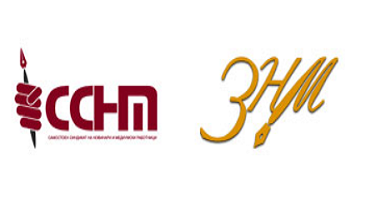 SKOPJE, 01.04.2020 – Independent Union of Journalists and Media Workers (SSNM) and the Association of Journalists of Macedonia (AJM) strongly condemn the decision of the employer “Net Media Group” who owns the Internet portal “Lokalno” and “Standard” to fire at least five journalists. Part of were employed with a fixed term contract, and the other part were hired with freelance contracts.

Although this step was explained and justified with the crisis caused by the coronavirus, the dismissal of journalists should be the last solution, given the significant role of the media in emergency situations.

This procedure is particularly surprising due to the fact that the Government has announced a set of measures for the media, which are conditioned, among other things, by not dismissing journalists and media workers from work during the emergency measures.

SSNM and AJM appeal the employer to reconsider this decision, which at first glance is hasty, because according to the government’s measures, the least that can be offered to the journalists is the minimum guaranteed salary. At the same time, we believe that the practice of owners demanding from journalists and media workers who have valid contracts to sign a termination of employment is unallowable and unacceptable. This causes direct harm to workers and we suggest that such offers should be rejected immediately.

The dismissals came without any prior notice or report about the financial situation of the owners. This leaves the impression that the owner does not expect or hope for future government measures to mitigate the impact of the crisis on financial operations and planning.

This example has a negative effect on the general picture and indicates that the media and journalists are the first to be hit by the economic crisis. SSNM and  AJM fear that this case may cause a “domino effect” and negatively encourage other media to decide to follow the same practices.