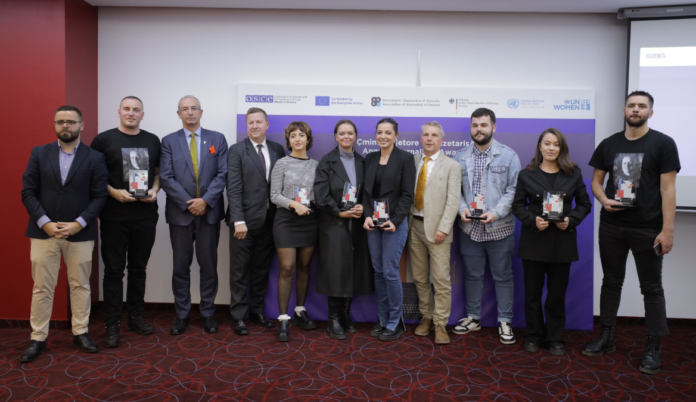 The Association of Journalists of Kosovo (AJK), with the support of the OSCE Mission, European Union, UN Women Office, and German Embassy, presented today in Pristina its 2022 Annual Journalism Awards to journalists for their stories in six different categories.

Through these awards, the AJK and its partners are seeking to promote media freedom and safety and professional journalism, and honour journalists who produced outstanding stories during 2022.

“With media freedom in decline across the world it is vital that media use the power and influence of information responsibly, and inform the public with accurate, objective and independent news they can trust. I’m glad these awards go to such journalists in Kosovo, and I applaud their work in the interest of the public,” said Ambassador Michael Davenport, Head of OSCE Mission in Kosovo, as he presented the Journalist of the Year Award to Saranda Ramaj.

Saranda Ramaj, is a journalist with Koha Group. She has produced many public interest articles and investigative stories. They are related to corruption, irregularities in the justice system, abuses in healthcare and procurement, and violence against girls and women.

“With these awards, we draw attention to all the work done by the media, and all the hardship they experience while enabling democracy by informing the public and keeping the governments and officials accountable. We must all work to ensure that journalists can work freely, and all attacks against the media must be promptly investigated and adjudicated,” said Tomas Szunyog, EU Ambassador in Kosovo. He presented the Best Web Story of the Year award to Adelina Ahmeti.

Adelina Ahmeti is a journalist with Kallxo. Her series of articles is about the Prosecutorial Council of Kosovo, which has cancelled the recruitment of professional associates in the prosecution offices of Gjakova, Peja, and Prizren after BIRN reported that the Chief Prosecutor of Gjakova, Ramiz Buzhala, had leaked test questions.

“I am proud that UN Women has established the “Annual Journalism Award for Women’s Empowerment. At a time when the media is dominated by political issues and minimises the space for issues such as gender equality or the impact of global crises on women and girls, this award that will be presented today also focuses on the importance of advancing gender equality, and empowering women through the media in Kosovo” said Vlora Tuzi Nushi, Head of the UN Office in Kosovo. She presented the award to Riola Morina and Medinë Dauti.

Riola Morina and Medinë Dauti, are journalists with QIKA. They won the award for their article “The invisible women”. This research carried out by them scrutinises the inter-sectoral nature of challenges which women of Roma, Ashkali and Egyptian communities face, and highlights the fact that they are particularly affected by poverty and exclusion. They face discrimination on many levels; both as women, and as members of a marginalized ethnic group.

“I’m really impressed by your work. The fact that your series of reporting provoked numerous reactions not only from NGOs and the general public but also from government institutions, means that with this release about discriminatory practices and attitudes against minority students from the RAE your story made a difference!! I would even go further. Ending discrimination against these very young kids will sustainably change their lives for the better. What more can a journalist wish for!” said Jörn Rohde, German Ambassador to Kosovo as he presented the Best TV Story of the Year award to Qendresa Tërshani.

Qendresa Tërshani, is a journalist with Klan Kosova. Her reports have to do with a ceremony of the ABC-bookend for first-grade students where Roma, Ashkali and Egyptian children have been discriminated against on an ethnic basis. In this case, their rights to inclusion in school cultural activities were violated. The publication of these TV stories prompted many reactions from all institutions at the central and local levels, including civil society organisations. As a result of her TV stories, the Ministry of Education, Science, Technology and Innovation initiated investigations.

Dardan Idrizi, is a journalist with RTV Dukagjini. His story was about Sabri Çabra and Astrit Hasani, two fans of KB Trepça, who never miss their matches even though they are both immobile.

Besnik Latifi, Cameraman and member of the AJK’s Board presented the Best Cameraman of the Year award to Korab Basha and Burim Mjeku.

Korab Basha and Burim Mjeku, are camera operators with Telegrafi. They won the award with their footage of the story “Members of the KSF during exercises in the “NATO Soldiers barracks in Istog”.

“I am very happy to see our colleagues’ hard work and dedication be awarded today with this ceremony. We have seen some exemplary journalism this year which shed light on topics such as misuse of public funds in the health system and racial discrimination in the country, or serious ethical breaches in the justice system. Encouraging to see that most of the winners are women, which only shows the crucial role they play in our media scene” said Xhemajl Rexha, the Chairperson of the Association of Journalists of Kosovo.

Jury members in this year’s edition of the Annual Journalism Awards were: Ismet Hajdari – Veteran journalist, Blerjana Bino – researcher on the SafeJournalists platform, Xhavit Kajtazi – Veteran sports journalist, Arben Hajredinaj from the OSCE Mission and Fatmire Tërdevci from the office of European Union.