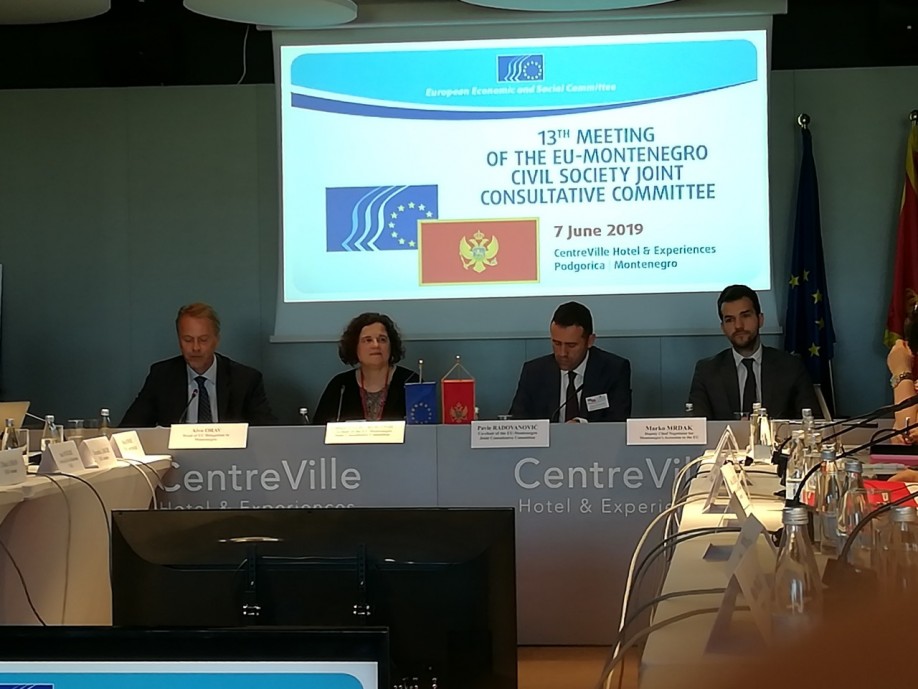 PODGORICA, 04.07.2019. – The EU-Montenegro Civil Society Joint Consultative Committee (JCC) is still concerned with the state of freedom of expression and the environment in which Montenegrin media operate, especially when it comes to the investigations of attacks against journalists and political interference and pressure on the Public Broadcaster Servis Radio Television of Montenegro (RTCG).

The critically oriented NGOs are not welcomed on RTCG and that their work is mainly portrayed through a negative lens, it was concluded at the thirteenth meeting of JCC.

„The JCC once again urges the Montenegrin authorities to effectively investigate both old and recent cases of violence against journalists as well as to identify and prosecute the perpetrators and those that are behind the attacks, and to facilitate the work of the ad hoc Commission monitoring cases of violence against the media. Furthermore, the JCC appeals on Montenegrin authorities to provide equal chances for functioning of all media, regardless of their editorial policy and to implement relevant recommendations of the Joint Programme of the Council of Europe and the EU “Reinforcing Judicial Expertise on Freedom of Expression and the Media in South-East Europe (JUFREX)”, It is stated in the joint statement from the meeting.

The members od JCC are once again emphasised the importance of independed CSOs being effectively involved in all aspects of policymaking and in EU accession negotiations, and it highlights the role of CSOs when it comes to improving the overall democratic environment in Montenegro.

As specified, the JCC is still concerned about the negative environment in which certain CSOs operate, especially the NGOs who is critically oriented of governmental policies in the area of the rule of law. They mentioned the controversial dismissal of NGO representatives from key institutions and bodies such as the RTCG Council, the Anti-corruption Agency and the Agency for Electronic Media.

The JCC directed the requests to the Montenegrian authorities to revise the legal framework in order to enable free access to information, without unnecessary restrictions. The board notes the growing trend of public institutions declaring information as classified as a matter of serious concern.

At the same time, JCC praised the implementation of the Law on NGOs and the establishment of a functioning mechanism for co-financing EU-funded projects, although they reported some difficulties when it comes to organizing consultations before publishing open calls for funding. Also, the members of JCC invite the Montenegrin government to enable access to co-financing not only to NGOs, but also to other types of CSOs.

The EU-Montenegro Civil Society Joint Consultative Committee (JCC) is one of the bodies set up under the Stabilisation and Association Agreement between the European Union and Montenegro. It enables civil society organisations from both sides to monitor Montenegro’s progress towards joining the European Union and to adopt recommendations for the attention of the Montenegrin government and the EU institutions. The JCC is made up of twelve members, six from each side, representing the EESC and Montenegrin civil society.