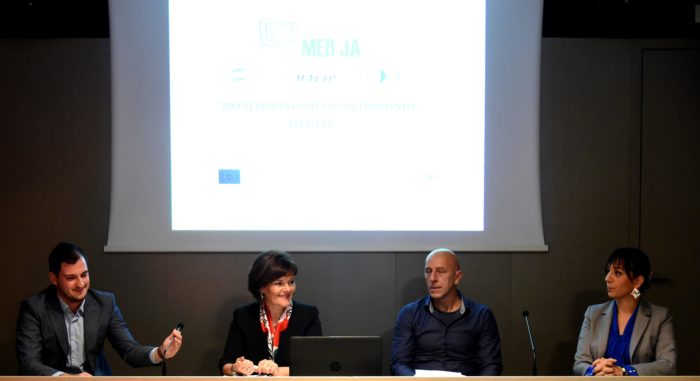 PODGORICA, 13.11.2019. – From the beginning of 2016 until the end of 2018, 25 lawsuits were filed against the media and/or journalists for compensation of non-pecuniary damage for violation of honor and reputation, according to the research of the Trade Union of Media of Montenegro on cases of violation of personality rights in the media 2016-2018 “Monitoring to free media”.

“From the media and journalists, in all initiated cases for which SMCG could gather information, 274.900 euros was requested for non-pecuniary damage for violation of the personality rights. The maximum amount claimed was 100.000 euros, and the minimum amount did not include a sum of money but only required the publication of the judgment. In five cases, the lawsuit, in addition to the amount of money, sought the publication of the judgment”, said Bojana Lakovic Konatar, one of the authors of the research.

The presentation of the Report was attended, among others, by the President of the Basic Court in Podgorica, Zeljka Jovovic, and the Legal Affairs Coordinator of the Centre for Monitoring and Research, Ivan Vukcevic, and both expressed satisfaction with the way the research was done. Jovovic stressed that the goal of the media and the judiciary should be the same- a satisfied citizen.

“Journalists and the media are here to help society to be out of the fog and to ensure that everyone has not their own rules of the game”, said Jovovic.

Out of the total number of initiated proceedings, 14 or 56% are final, while the remaining cases are pending. In six cases, the lawsuit was dismissed, in five it was partially adopted, while in one case it was adopted (although no financial compensation was claimed in that case). Also, the research shows that in one case an out-of-court settlement occurred, while one case ended with a decision to withdraw the lawsuit.

In all finalized cases, journalists and the media were asked to pay 8.200 euros in compensation for non-pecuniary damage due to breach of honor and reputation. That amount represents just under 3 percent of the total money requested.

“With analysis of the cases who are still in the process it was noticed that in some cases the judges often change, which leads to a delay in the proceedings, and some proceedings last longer than three years. In some cases, three judges were changed until the first instance verdict was passed”, said Marijana Camovic co-author and President of Trade Union of Media of Montenegro.

The analysis has also shown that for the violation of personality rights – honor and reputation the media was mostly sued, and in some cases editors and journalists appear as second defendant. Thus, in more than half of the cases (56%), only the media was sued, while in the remaining eight cases for which information was received, the defendant were the media (as the first defendant) and the editor or journalist (as the second defendant). As for the type of media, it is interesting that in all cases private media were sued, that means that the Public Broadcaster Service – Radio Television of Montenegro and local public broadcasters were not the subject of any lawsuit. On the other hand, the mostly sued are the print media (18 cases or 72%). In two cases the portal was sued, and in three cases the electronic media – television was sued.

“When it comes to the reasons for the lawsuits, the prosecutors generally cite wrong interpretation of the facts, relating to the acts which they did not commit, disrespecting the presumption of innocence… How prosecutors stated, common to most lawsuits is that the texts were more correct than the title, so their right to honor and reputation is mostly violated with title”, said Lakovic Konatar.

According to the data by SMCG, from the submission of the lawsuit to the final decision pass of two to three years, but as the number of cases is still pending, it is certain that this average will increase.

The investigation also showed that some judges not accept the fact that the media in the self-regulation process acknowledged their mistake and tried to correct the damage, they already using it as an additional argument in the reasoning of the conviction.

“This information is of great importance and shows that in addition to educating media employees to respect more the Code, it should also explain to judges what mediation means and how important (and difficult) is to resolve similar cases out of court and that really need be important circumstance when a judgment is passed”, it was reported from SMCG.

The research was conducted within the framework of the project “Monitoring for free media” implemented by the Trade Union of Media of Montenegro within the framework of a major project “Judicial Reform: Upgrading CSO’s capacities to contribute to the integrity of judiciary” financed by the European Union, and implemented by the Center for Monitoring and Research (CeMi) in partnership with the NGO Center for Democracy and Human Rights (CEDEM) and the Network for the Affirmation of European Integration Processes (MAEIP).