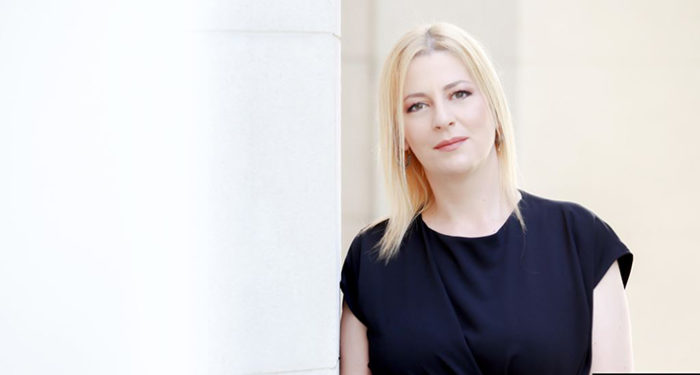 Sarajevo, 06.09.2019. – My female workmates and colleagues have often been described as sluts, second – hand woman and some politicians wanted “to swim in their blue eyes”. They were also described as whores and foreign mercenaries. All professional references they had were neglected and most of them (and serious war – time reporting experience) and the fact that they had been dealing with some of the biggest Bosnian and Herzegovinian political, criminal (if these two need to be separated at all) and other countless affairs; the fact that they often had to get up and get changed from pajamas into cloths and report live from Belgrade after Radovan Karadzic was arrested; that they had to follow not only “local” , but also other types of combats, battles and live wars. When they managed to advance their career, some people would often bring their career progress in connection with love affairs with certain male persons, discrediting thus their own success. After all, what is woman with guts, (and I shall not use other term) unless she is supported by men in the Balkan region?
No person has even been prosecuted for hate speech, encouraged, instigated open lynch and defamations/libeling, since all of these had been directed and addressed against my female colleagues and editors.

Woman should (not) be in journalism

This time I shall particularly write down about women, but I shall not forget the fact that even men working in the field of journalism, (and I refer to those men with their own dignity); men working in this misfortunate country where we vastly wrapped up the profession of journalism into sticky mud, have never found easy to work in this specific branch and area. However, it appears much easier to through the same mud on women instead. Woman should not get involved in journalism in the first place, including public scene or move away from any other place farther from her kitchen ovens and small kids.

Recently, our colleague Dalija Hasanbegovic – Konakovic was criticized for having obtained a diploma with Roman Catholic memo inserted on top of it. Unless I am mistaken, she had, after getting the “non – believer” diploma, managed to acquire many other diplomas on international levels. They would most probably be happier should she have never be awarded with any diploma; and perhaps she should have stayed close to the above mentioned kitchen oven, work on tiny embroidery, instead of being most recognized face on one of the most prestigious TV house in the region. Additional problem, as far as Dalija Hasanbegovic – Konakovic is concerned, was the perception others have about her, as being legal wife to one of the local politicians where she should (in their own opinion) be deprived of rights to act as solely independent woman and her right to be valued through her personal and professional results; shortly to be a person by all means instead of merely being a wife.

I have been away from the sludge for nearly two decades when they managed to put me there, as oppose to my female colleagues, that is, politically – biased female reporters. I simply loved the art but I knew that I had lacked in discipline to become a solo pianist career and that my temper could only fit into the dynamics of journalism after which I managed to combine two loves into a single one; journalist who would follow art events and venues. And it was very nice and I somehow felt protected in this field. I would interview Jergovic, Hemon, deceased Predrag Lucic or Borka Pavicevic; I would have a chat with Boro Cosic about the philosophy of human existence; make a journey to Cannes or Venice evoking happy times etc. Every meeting with people that had made brilliant achievements in the field of art would simply make everyone ennobled. You simply get to learn something every time.

In 2008 I began with more serious activism covering the issue of LGBT community. And this also was, despite the battle I had to accept and take, some kind of safe space, surrounding with people with whom share same views, cognition that you are, if nothing else, indeed on the right side (that you are doing good things for generations to come). Taking into consideration that those who have been assaulting LGBT community members had most probably never even been to theatre, let alone watched the TV program covering cultural affairs; I was simply not in their focus at the time. We were far away, as we are even today, and I was (as I am now) the very same person before they had decided to appoint me to the position of an acting director of Sarajevo Canton Public Television. The trouble was that I have no longer been writing about books that public should read or write about theatre plays that public should go and watch; instead I announced the engagement of an independent audit commission that should examine the regularity of business operations during the time of those who had been running this TV house and those that are now political opposition.

Target placed on the forehead

The lynch I have been experiencing and that derives from right – wing media houses and individuals that are also belong to right – wing political parties, had initially been created based on my name and my engagement and activism within the LGBT community. They only used my name (ethnic origin) as “smoked screen” fearing that they may no longer use political party microphone, which was exactly what they used the TV house (that I now run) for. LGBT activism has also only been used to cover their homophobia that they surely cherish, and yet another opportunity to outline and highlight how they would isolate every single entity that is different from what they consider natural and right. The allegations that I am “gay activist” was posted in certain media source (which should at least not be permitted in the 21st Century) and this allegation was created with the purpose of creating an idea whether I was “just” an activist or a person that prefers same sex or gender. We all know that once you put any person in the LGBT context, you basically draw a target on her/his foreskin.

The above mentioned element were sufficient enough for the first wave of lynch, although they simply had to carry on and continue. The purpose of it me being discredited, including the TV station and accordingly the actual Sarajevo Canton governing authorities, that is, the Government in particular and it was part of subversion they have been announcing for September. I should be highly discredited and diminished by September, so no person after me would even think about accepting the managing position, instead of being a puppet to recent ruling political party.

Bearing in mind that I only paid serious attention to my professional career in my life, so far making no compromises at the cost of my own existential jeopardizing (in what can be seen as my ten years engagement), they simply could not find skeleton in my closet. Therefore, their next stop was my ethnic origin and the question of all questions: „Where were you in 1992?” I spent the time during this particular period in my family house in Ilidza and we could not have removed the house from this area by mounting wheels on it at the time, though this fact does not disregard the fact that I have been considered chetnik. This is why a friend of mine suggested that I should write a book with remarkable title “I was 12 when I joined chetniks”. They did not even spare my family talking about the period when my mother worked at the Clinical center at the University of Sarajevo. They must have thought that she should have left her kid (me) in Ilidza because every kid has his/her own destiny. Nowadays, I’ve noticed that they decided to Google the following subject “Kristina Ljevak – husband” – and I therefore conclude that he is going to be their next target or they are just checking if there were any male person in my life, or my heart can only be shared with another female person.

Why we must not remain silent

When I try to use humor as my defensive weapon in order to protect myself from public cancer that exists in BiH society, I often say that I feel as being on top of the CNN managing level and that I would, after going through all this, be able to run for the highest possible position and function in GRAS.

I intentionally do not release and post threatening messages that I receive in my inbox, because this is not my style. I hope I will have enough time to report all these threatening messages to local police authorities. Although I reckon that contents posted and published in local media and web site houses were sufficient enough for police officials. The hate was always the same it is just about tiny differences in style and scope of illiterateness. I have always been saying in other occasions that we are not all build from the same “material” and that people react in different ways to identical situations.

Recently, my colleague with a long lasting experience in his profession told me that he could not recall the case (like mine) and he could not remember that anyone from the field of journalist had been exposed to hate speech with such an intensive level. My intention is certainly to forget the evil, regardless to whom it may be directed. The experience that I have been going through I consider as the opportunity to get familiar with my own strength being aware that the person with more weak personality and dignity would most probably been unable to cope and endure all of this and would eventually end up in neuropsychiatric clinic as their patient.

Therefore, because of this (and not because of me it is important to amend and change the law and accordingly legally impose punishments, fines and sanctions against all those who threaten journalist or journalists because threats against journalists should be treated as threats directed against officials (e.g. the police) and disallow anyone form even thinking that they might be able to “enjoy swimming” in our blue eyes or to address us with: “Look at your head?” We must not be silent, we must not stop reacting accepting this that this is the only way, we must not leave journalism or leave our country, because the other (evil side) side is actually hoping for this to happen and our duty is to stop them. My generation was misfortunate and had to spent time in war; they were and still are in transition and this limbo represents where we are at moment. Due to some future generations, we feel obliged to return the dignity to our processual occupation and based on this all to bring those to minimum level since they tend to teach us how to behave.

(The article is published in E-journalist bulletin; the author is current v.d. of TVSA and longtime journalist)