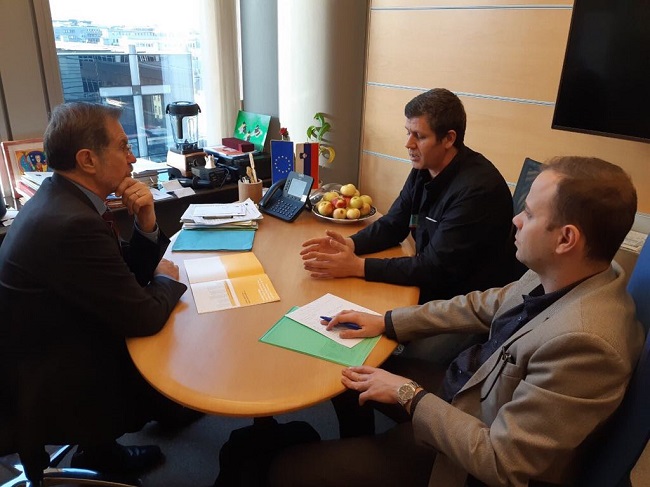 At the first meeting, the President of AJM – Nasser Selmani, the Executive Director – Dragan Sekulovski and the communications coordinator – Deniz Sulejman met with the director of the European Federation of Journalists – Renate Schroeder and her colleagues whom they met several times in the rest of the period spent in Brussels. They discussed the current situation with the media in the country, the steps to be taken, as well as the possible future cooperation with the EFJ and the IFJ in order to increase the capacities of journalists and to increase the level of safety in their work. The second meeting, attended by the representatives of AJM, was the group meeting with the European Commission (DGNEAR) to discuss media reforms and the safety of journalists in the country and the region of Western Balkans, while later on the same day they held a bilateral meeting with the responsible persons for Macedonia.

During the visit, the representatives of AJM had bilateral meetings with several MPs from the European Parliament, such as Alojz Peterle, Ivo Vajgl and Tonino Picula, and after that, they attended a briefing where MEPs Tanja Fajon and Knut Fleckenstein spoke to the Western Balkan journalists.

At all meetings it was pointed out that the fact that in the latest version of “Plan 18” of the Government of the Republic of Macedonia the part concerning the reform of the media was deleted. Also, a special accent was placed on the high level of impunity for attacks against journalists whose percentage is still very high. Another topic which was discussed was the need for changing the disputed parts of the Electoral Code for which the Association of Journalists of Macedonia alarmed at the very moment of its adoption, and in that direction was emphasized the need to unblock and finally pass the Law on Audio and Audiovisual Media Services, which has been stuck in the parliament for a long time.

This visit was organized as part of the activities undertaken by the AJM in the area of advocacy and lobbying for the safety of journalists and media freedom in Macedonia. As a result of the meetings, MP Ivo Vajgl stressed the importance of the media in a democratic society at yesterday’s plenary session of the European Parliament. He said Macedonia would need to provide space for free and pluralistic media, it should protect journalists in the country and fight the organized crime in a more effective way.