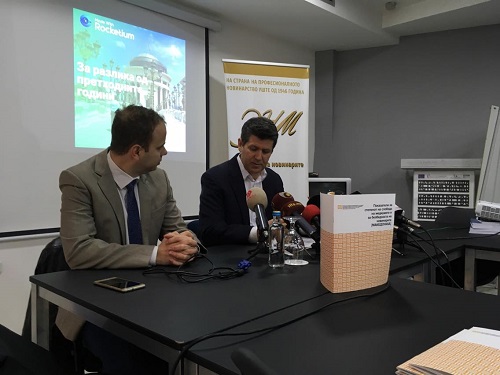 SKOPJE, 22.01.2018 – The Association of Journalists of Macedonia today in Skopje, presented Report for the Indicators for the degree of media freedom and the journalists’ safety for the year 2017.

President of AJM Naser Selmani said that in the last year in Macedonia journalists were blackmailed, persecuted, beaten, received death threats, they were declared as traitors, etc. “Violators attack journalists physically and verbally because they want to intimidate and silence them, in order not to reveal the truth about the unlawful behavior of the Government,” he said.

According to the report, last year in Macedonia 18 attacks against journalists were registered, out of which 13 were physical and verbal attacks, while the others were insults, interfering in the work and destruction of properties.

Selmani also expressed concern that the Public Prosecution has so far failed to fill charges in front of the Courts, for violence against journalists and hate speech. “The well-known triplets of VMRO-DPMNE, which carried out campaigns of insulting and intimidating journalists, remain unpunished,” Selmani said.

Despite the lack of safety at their work place, journalists in Macedonia are working under extremely poor conditions. They have small and irregular wages, and they do not have contracts for permanent employment, which negatively affects their professional independence.

In the report is noted that the media legislation in Macedonia is not fully in line with the best European practices and in the last year did not have any improvements.