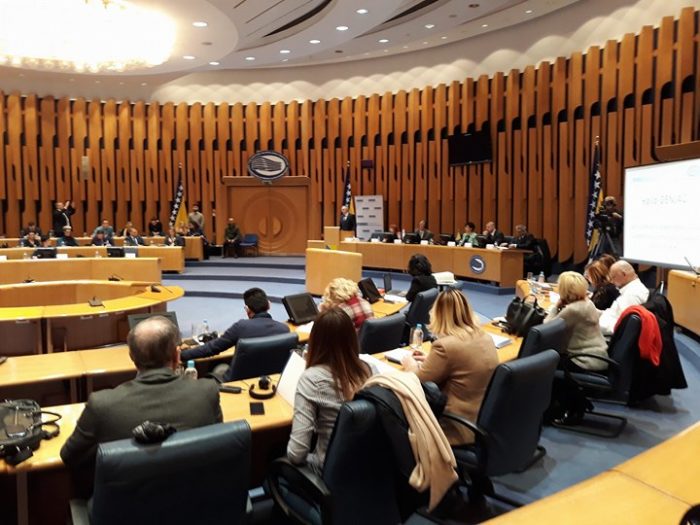 SARAJEVO, 09.03.2018.- There are numerous of attacks with which media in BiH are facing with: threats and attacks, lack of media ownership transparency, media advertising and funding, hate speech, as stated at the thematic session “Freedom of expression and freedom of the media”, which was held today in the Parliamentary Assembly of Bosnia and Herzegovina.

The session participants pointed out the need for regulator independence and the importance of institutional and professional fight against hate speech in traditional and online media. It was concluded that the results can only be achieved through the joint action of the governmental and non-governmental sector, with the support of international organizations such as the Organization for Security and Cooperation in Europe (OSCE) and the Council of Europe. Halid Genjac, the first deputy chairman of the PSBiH Joint Commission for Human Rights, opened a conference pointing out that in BiH “there is a need to improve the legal framework that prescribes the protection of journalists, as well as the prevention of hate speech as one of the key issues, in advanced democracies and especially in the transition “.

Security is still a fundamental problem in the context of media freedom, both in BiH and throughout the OSCE region. “Freedom of the media and speech must be protected because every attack on a journalist is an attack on freedom of expression,” said OSCE Mission to BiH Bruce Berton, reminding journalists that it is important to remain consistent with high professional standards. Communications and Traffic Minister Ismir Jusko stressed that joint action can do a lot to reduce the number of attacks on journalists and that it is necessary to be loud in condemning attacks and acting preventively. He also underlined the obligation of the state to align legislation with EU directives, including those related to the transparency of media ownership.

Ombudsman for human right Jasminka Džumhur emphasized the importance of security issues for journalists and the need for independent action by the  Regulatory Agency for Communications. She also said that it is necessary for criminal codes to define a criminal assault on journalists as professionals, which is, among other things, a prerequisite for keeping records of cases involving journalists within judicial institutions. When it comes to the application of the Law on Free Access to Information, the importance of applying the test of public interest and certain procedures is emphasized.

“There are still numerous weaknesses in applying this law. When it comes to the institutions, it is avoiding solutions, bad decision clarifications, the unused possibility of partial disclosure of information and the failure to reach a decision within the legally prescribed deadline. In the case of submitting a request, the basic problems are the imprecision of the request, the lack of knowledge of procedures, the non-use of the instruments provided by the law and the search for information for a third party ” said Džumhur.

Executive Director of the Press Council in BiH Ljiljana Zurovac talked about the trend that these self regulatory body for print and online media recorded ever since it was estabilished.

Since 2001 there is a noticeable increase in the number of citizen complaints to media reporting, which means that the concept of self-regulation is being accepted by citizens, said Zurovac. She pointed out that the service of mediation that is provided by The Press Council, is in in comparison with expensive, complicated court,  proceedings free, fast and effective.

„Although citizen have apsolute free acces to internet this freedom, is often misused. Therefore, there is a real need for internet to be regulated“, said Zurovac and emphasized the problem of online media and portals which do not have impressums and the copy right rights in the online sphere. She also noted that the draft law on Media ownership transparency, which should prescribe certain obligations for online media as well, is currently under preparation. The General Secretary of BHJA Borka Rudić emphesized the importance of official reactions of institutions to the threat of freedom of expression and security of journalists over the past year. „Freedom of Expression is not only a guestion of media community, but a constitutional obligation in BiH. The opening up of institutions to these issues has also resulted with initiatives of state authorities in order to defend freedom of expression, “said Rudić.

She pointed out that it is important to harmonize laws on all levels, especially Defamation laws, and work on reaching a consensus on the professional work of judicial institutions.

Media Law expert, Mehmed Halilović talked about the institutional fight against hate speech,  in both – traditional and online media. „As a society, we are obligated to react, through the educational system reform and the adaptation of criminal laws, taking into account the experience of developed democratic countries and international standards“.

The thematical session “Freedom of expression and media freedom” was organized by the Joint Commission for Human Rights of the Parliamentary Assemble of BiH in co-operation with the OSCE Mission in BiH, bringing together more than 90 participants, representatives of legislative and executive institutions, media, regulators, international organizations and non-governmental sector .