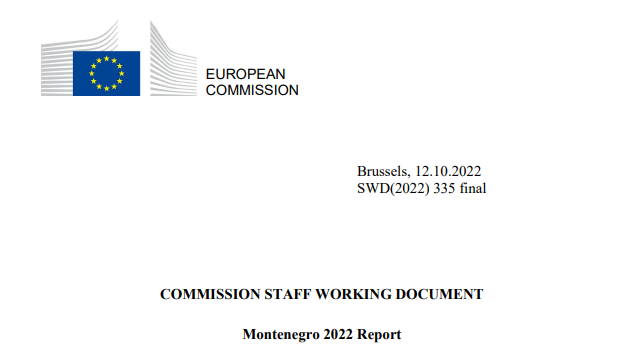 BRUSSELS, 19.10.2022. – On freedom of expression, limited progress was made on last year’s recommendations. The legal framework for the protection of journalists and other media workers has improved thanks to the adoption of amendments to the Criminal Code laying down more stringent penalties against attacks and threats against journalists and obstructing or preventing them from performing their work.

This is stated in the latest European Commission report on Montenegro’s joining process.

Amendments to the Criminal Code were initiated by Action for Human Rights and the Trade Union of Media of Montenegro and were later supported by seven non-governmental organizations dealing with media freedom. The advocacy process lasted more than ten years.

The Criminal Code has been amended so that the penalties for criminal offenses in which journalists and other media workers are victims have been increased.

However, as written in the Report, the position of media employees has not improved: “Journalists continued to report overall poor working conditions, including low salaries, unpaid overtime work, security risks and different forms of pressure and undue influence on their work, both from media owners and third parties. The trend of media outlets and journalists launching defamation lawsuits against their competitors has continued. The socioeconomic situation and working conditions are particularly difficult in local public broadcasters, which are directly exposed to editorial influence and financial control by local authorities.”

Also, in the report, the EC notes the “strongly worded public criticism of the work of both public and private media outlets” by high-ranking officials, as well as the lack of effective judicial proceedings in important older cases of attack on journalists.

“The institutional and law enforcement response to address new cases of violence against
journalists and media workers has improved. However, there has been no breakthrough in
critical old cases, including the 2004 murder of the editor-in-chief of the daily newspaper
Dan. In December 2021, the police arrested two individuals, one of whom a police officer, on suspicion of being involved in the 2018 shooting of an investigative journalist.”

It also states that the adoption of the draft media laws and strategy is pending.