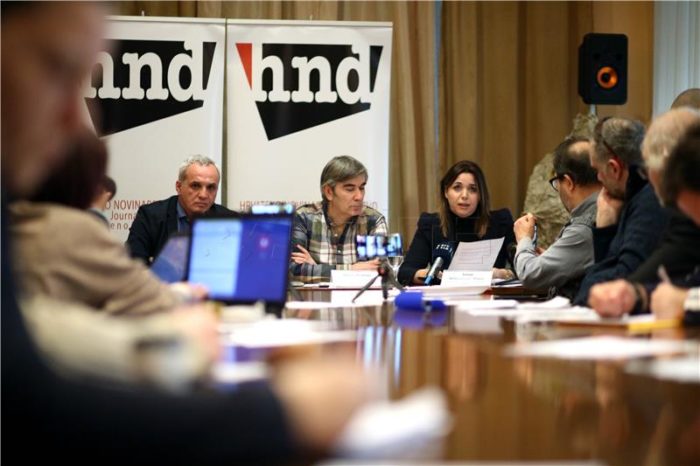 ZAGREB, 28.12.2018. – The Western Balkan’s Regional Platform for Advocating Media Freedom and Journalists’ Safety, which represents more than 8000 members, strongly condemns the Croatian Radio-Television’s (HRT) act of filing a lawsuit for alleged criminal offences against its honour and reputation by the Croatian Journalists’ Association (HND/CJA), its President Hrvoje Zovko and the President of the HND/CJA Branch at HRT, Sanja Mikleušević Pavić.

Employers’ pressure on employees is not uncommon, but only HRT thought to express such pressure through tens of thousands of euros in sought damages, which tells us that the goal of claims is not satisfaction because of the possible acknowledgement of alleged damage HRT suffered due to actions of HND/CJA representatives (who either are or have been HRT employees, suffering financial and other kinds of pressures). The current HRT management considers suing individuals whom it wronged already as permissible and moral. Let us remind of the September 2018 extraordinary termination of Hrvoje Zovko’s employment contract, after he became the HND/CJA President and spoke up about censorship on HRT.

Additionally, current HRT management should be acquainted with the European Court of Human Rights’s practice of not entertaining damage claims amounting in tens of thousands of euros; awarding such putative damages is completely contrary to the Strasbourg court practice.

We ask the HRT to withdraw the filed lawsuits as soon as possible and to stop pressuring HND/CJA, among whose members are numerous HRT employees, but also to stop harassing representatives of the journalists’ association because such behavior is unacceptable and unworthy of a public service broadcaster, which is thus caused permanent damage. Such behavior is intolerable within an EU Member State.

We also recall that the people who are at the forefront of HRT, as representatives of a serious media outlet that HRT should be, must know that they have a range of measures at their disposal that they could have used to defend HRT against, as they claim, unfounded allegations. They have resorted to the most unpopular one, and the last one on the list of what should be done when someone estimates that damage has been done to them. The amounts they seek are an obvious indicator that they want to destroy financially and silence the HND/CJA and its representatives.