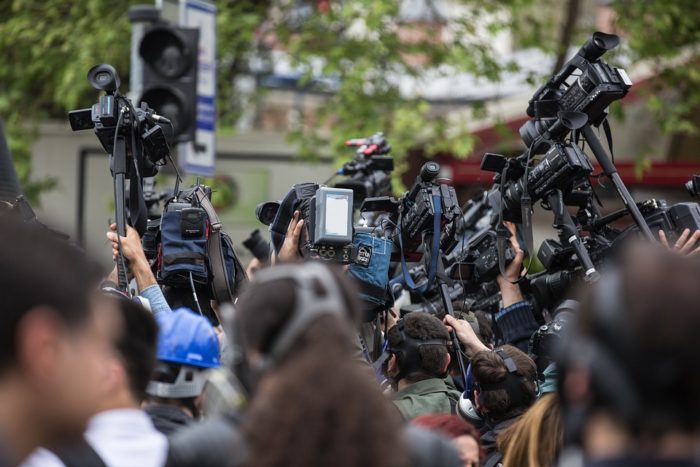 “From the beginning of the dialogue with the Government of the Republic of Serbia and cooperation on the development of the new Media Strategy, despite the explicit position of Prime Minister Ana Brnabic that there is political will to improve the situation in the media sphere, this has not yet happened in practice.

The situation is becoming increasingly complicated every day and it is badly affecting journalists and the media, media freedom and the right of citizens to be professionally and objectively informed. That is why it is necessary for the authorities in Serbia to quickly and efficiently address the demands of the representatives of the Team for Dialogue, and demonstrate in action the political will to regulate and improve the media scene.

Journalist and media associations have entered into the renewed process of the Media Strategy drafting and dialogue with the government hoping that they can really contribute to the improvement of the media scene, and not to be part of a process that would only be useful for Serbia to obtain better evaluation from international organizations, while the media situation remains the same or deteriorates.

We were open about the fact that these two processes are interdependent and that we will not give legitimacy to the strategic document without solving current problems in parallel, especially having in mind that the process of Media Strategy development is full of problems and controversy.

We express our full readiness to invest all our expertise in these processes, if the Government is really ready to change its attitude toward media freedoms and wants to find the best way to formalize it.

Therefore, in the future, we expect active involvement and proactive approach of the Coordination Body for Cooperation with Media of the Republic of Serbia, not only in responding to the demands of the Team for Dialogue, but also in independently identifying problems and offering solutions.

At the September meeting, we expect the Coordination Body to inform the Team for Dialogue of its undertaken actions toward meeting the following demands:

1. Representatives of the authorities to urgently stop disparaging, insulting, degrading and discriminating journalists, media, journalist and media associations, endangering their safety and declaring them enemies of society, “foreign agents” and “traitors”. Representatives of the government continually need to emphasize that critical media and difference of opinion are part of the democratic process, and should support them;

2. Tax and other inspections immediately to stop jeopardizing the work of independent media, especially Juzne vesti news portal and other media that experience similar administrative problems due to their editorial policy. Tax Administration, as well as other inspection services, to suspend activities that endanger media freedoms. To perform an independent audit of the tax proceedings conducted against Juzne vesti, and determine the responsibility of the Director of the Tax Administration in Nis and the acting inspectors in case of law violation;

3. To urgently stop with judicial campaigns against the media with independent editorial policy that could jeopardize the survival of these media, such as the case of recent controversial judgment of the Higher Court in Belgrade, passed against the portal Pescanik, following the lawsuit filed by Nebojsa Stefanovic for tarnishing his honor and reputation. Although it is the first instance judgment, it is important that representatives of the authorities bear in mind that the practice of the European Court of Human Rights states that persons who perform public functions should tolerate a higher level of public criticism and that freedom of expression is much broader in relation to those in political office. Also, the Law on Public Information and Media clearly states that “The elected, appointed, i.e., assigned holder of public office shall be obliged to be subjected to the expression of critical opinions that pertain to the results of their performance, i.e., the policy they implement, and the opinions are in relation to performing their function – regardless of whether they feel personally affected by the expression of these opinions.” That the Ministry of Justice, in cooperation with international organizations, organizes seminars for judges who arbitrate media cases, to align with the relevant practice of the European Court of Human Rights in this area;

4. As soon as possible, to uncover all cases of attacks on journalists and threats to their safety, to initiate proceedings and to complete proceedings against the perpetrators within a reasonable time. The representatives of state bodies (Republic Public Prosecutor and Ministry of Interior) in the Permanent Working Group on Journalists’ Safety to address with respect the representatives of journalist and media associations in this body and their demands, and respect the provisions of the Agreement on Cooperation and Measures to Raise the Level of Journalists’ Safety. This is a precondition to unblock the work of this body, which is, in our opinion, of great importance. It is especially important to completely resolve and to report to the public, the data related to cases of attacks on journalists who have drawn great attention of the public, such as the attack on May 31st, 2017. It is impermissible that the cases of murdered journalists have been left without a court ruling;

5. The authorities to urgently suspend political, moral and financial support to the media outlets that continuously violate the Law on Public Information and Media, the Law on Electronic Media, the Code of Ethics of Journalists of Serbia, constantly spread national and other hatred, provoke panic and create an atmosphere of fear and violence in the society. We expect from state authorities to strongly and publicly condemn this media practice, as well as to use the powers prescribed by the Law on Public Information and Media and the Law on Electronic Media against it;

6. It is necessary to determine the role of the Ministry of Culture and Information in the whole process of the media reform, given that journalist and media associations have had very serious problems with the Ministry in charge. The Minister has recently publicly insulted and humiliated journalists and media associations and their representatives in the Media Strategy Working group, thus jeopardizing the media reform process. We expect to accurately establish the responsibility of the Minister and State Secretary for this year’s project-based co-financing of media content call for proposals, which were sprawling with irregularities in implementation, and that there is a reasonable doubt that serious criminal offenses have been committed. It is also necessary to establish the responsibility of the Minister and State Secretary for the numerous problems that have prevented the first attempt to draft the Media Strategy;

7. The state urgently needs to take measures for the Tanjug news agency and Kragujevac Radio Television to come out of the illegal position as soon as possible and to enforce laws in relation to the finalization of privatization of Politika, Večernje novosti and Dnevnik. We believe that Tanjug and its services, must be urgently deleted from the Media Registry, in accordance with the law and the Government’s decree;

8., Authorities, at all levels, to immediately stop with the discrimination of the media in accessing public funds and stop with the catastrophic practice of project-based co-financing of media content. Pursuant to the Law on Public Information and Media, financial support from the calls for proposals should be awarded with taking into account the opinion of expert committees composed of representatives of relevant journalist and media associations, professional and uncompromised persons. This process must be fully transparent, placing public interest and the quality of the submitted media projects above all, and not political suitability. The Coordination Body and the competent government authorities should, in cooperation with journalist and media associations, send a letter to the local self-governments reminding them of their legal obligations and the meaning of project-based co-financing of public interest in the sphere of public information. It is necessary to clearly define which state body is responsible for the legality of conducting project-based co-financing on the local level, given the current practice of mutual shifting of responsibility. Other forms of public funding should be accompanied by a complete transparency of the process, clear criteria and measurable effects, fully in accordance with the law;

9. The Coordination Body must provide to the representatives of the Team for Dialogue, as soon as possible, complete information and a detailed list of all public funds in the media sphere given by the public sector institutions from the beginning of 2016 to present. This refers to funding provided under the Law on Public Information and Media, as well as on other grounds, whether they are public procurement or contractual services (promotion, advertising, sponsorship, public surveys, business-technical cooperation, production …). We request that this report cover the highest state bodies, ministries, independent organizations and funds within the state system, state agencies, state administration bodies, public authority institutions, state-owned public enterprises and companies with the majority of state capital. In the forthcoming period, it will be necessary to write reports on the allocation of public funds to media at the local level;

10. The Coordination Body to urgently initiate the procedure for amending the by-laws, according to the recommendations of the journalist and media associations, which will – in the current legal framework – improve the system of project-based co-financing, the functioning of the media register and the transparency of public funds spending in the media sphere. Based on the recommendations that we are submitting to you, it is necessary to make, in accordance with the laws, amendments to the rules of project-based co-financing process, issue an instruction (the competent ministry) for clearer definition of the category of funding that the public sector allocates to the media, issue an instruction (the competent ministry) on the data that must be publicly available in the media register, as well as the opinion by which the local self-governments will be reminded of their obligation to regularly submit data to the register;

11. The Coordination Body to urgently state its position on the unsatisfactory work of the REM Council and invite its members to act in accordance with the law, as well as to unblock the process of selecting the missing members of the REM. We expect that the with the changes to the laws, the role and position of this body will be completely redefined, and that discontinuity in its work will be achieved;

12. It is necessary for the Coordination Body to urgently enable the implementation of the decision of the Commissioner for Free Access to Information of Public Importance and Personal Data Protection and instruct all public authorities to fulfill their obligations under the Law on Free Access to Information of Public Importance. To urgently stop the trend among public authorities to increasingly disregard the demands of journalists and citizens, as well as discriminate against certain media and journalists, by refusing any communication with them;

13. It is urgent to return a dialogue on important social issues to the public sphere. Government is obliged to cherish critical opinion as a public good, and, in particular, in public media services, to allow access to all political and social players under equal conditions. In accordance with the Law on Public Media Services, it is necessary to immediately enable true, impartial, full and timely information on public media services, the independence of their editorial policy, the independence of financing, to prohibit any form of censorship and illegal influence on the work of the public media service, news desk and journalists, to enable the application of internationally recognized norms and principles, and in particular respect of human rights and freedoms and democratic values, as well as respect of professional standards and code of ethics. It is necessary for the Coordination Body to comment on the events on RTV, including the dismissal of editors and journalists from 2016 to the present, which drew great attention of the public.”