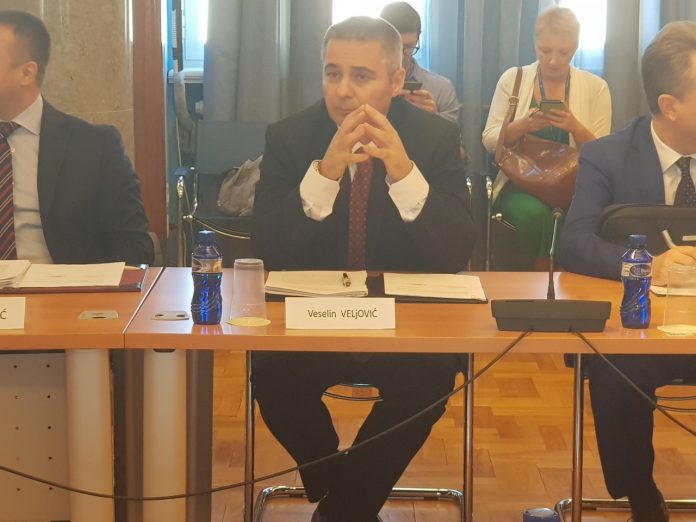 PODGORICA, 18.09.2019. – The case of Dusko Jovanovic’s murder has been resolved in operational terms, said Veselin Veljovic Director of Police Directorate, stating that there were omissions.

Veljovic said this at a meeting of the Committee for European Integration, at which a consultative hearing of representatives of state institutions was held on resolving cases of attacks on journalists and media property in Montenegro.

Veljovic said that the police is ready to act with dedication and responsibility in connection with the attacks on journalists.

He believes that significant recognition is what was announced by Minister of Justice Zoran Pazin and that those responsible should be held accountable.

“The ambiguity of the official note was made by police officers involved in the case. It did not exist in the official files, it was done but it did not receive the document form and for some unknown reason it was not misled”, Veljovic said.

He said that the case of Dusko Jovanovic’s murder was solved in operational terms as well as circumstances.

“I respect the efforts made by the authorities for identification. Omissions were made. If we have come to identification of the responsibility, I have no dilemma that they should be held responsible. No one can be evicted from responsibility. It is about anyone, at any level”, Veljovic said.

He said that the issue of responsibility is one of the most important issues in the Police Directorate.

Veljovic said that all foreign experts in Montenegro are welcomed and they are ready to cooperate with them.

“In relation to the cases we are talking about, we are ready to call them and tell them openly what we have done. If they point to certain problems, we are ready to accept it and act responsibly”, Veljovic said.

Affirmation of expression and protection of public word creators is an obligation of the state in all democratic societies, said Mevludin Nuhodzic Minister of the Interior.

“Freedom of expression is a constitutional category. These are justified expectations of citizens and journalists. No one democratic society can be imagined without freedom of expression. By adhering to these principles, the state has endeavored to provide protection and improve the media environment because it is in the interest of society”, Nuhodzic said.

According to him, the current media environment is fraught with challenges.

“The relevant ministries are continuously working to improve the set of media laws. All new solutions will help raise standards and reach EU standards”, Nuhodzic said, adding that the recommendations of the Commission were adopted last year.

“We have cases where the police work preventative. Contact persons for communication with editors have been designated. All of these activities have contributed to security, regardless of the thesis that there is no will to resolve attacks on journalists”, said Nuhodzic.

He stated that it was true that the omissions were recorded. “No one in the state does not negate that if we could not collect our evidence that someone could be charged.”

Nuhodzic said the number of attacks on journalists has been reduced.

“There is no selective approach regardless of political commitment. The determination of the state to protect the media rights and freedoms and to protect journalists within the limits of the normal and the possible is beyond question”, Nuhodzic said.

EU Chief Negotiator Aleksandar Drljevic pointed out that there were no attacks on journalists and their property this year.

“The attitude of state institutions to this important state issue is serious. The institutions are dedicated to improve the journalistic environment. There is zero tolerance for attacks on journalists”, Drljevic said.

He said he was convinced that Montenegro would reach the highest standards of a democratic society as the highest European values.

Marijana Lakovic from the Ministry of Justice’s said that out of four cases last year, three were resolved by judicial convictions and one was under investigation.

“This year in July, there were threats through social networks, one case, but there were no significant threats to journalists or their property”, she said.

Nikola Markovic, Editor-in-Chief of “Dan” said he was pleased that such a serious institution are dealing with the attack on journalists.

“There were problems with the Prosecution because we did not receive any documents related to the attack on Olivera Lakic for eight months, but after the insistence we received them”, he said.

Markovic said that they noted numerous omissions regarding the attack on journalists by Tufik Softic, Mladen Stojovic. “We are unhappy that they did not recognize the omissions one years ago and sanctioned those responsible in their ranks”, he said.

According to him, some investigations last for a long time, and people who lead them must be held accountable. “No one was dismissed or held accountable for the omission.”

Markovic add that in the case of Dusko Jovanovic, Zoran Pazin Minister of Justice said that the omissions were recorded.

“It is good that they have acknowledged and confirmed the Commission allegations that omissions exist, but that is not enough. We need to determine who those people who made the failures are and why they happened. Is just ignorance the cause”, he said.

Markovic warned that there was no information that anyone was dealing with the omissions. “And we have to talk about it and insist and identify specific names for omissions and responsibility.”

Markovic replied that there is in Montenegro “pollution of the media scene and that it comes from outside is dominant” and that is the fact.

“I do not agree with you connecting attacks on journalists with their writing. As a society we must not allow these media to be attacked. There are other mechanisms for them if being unprofessional. If we relate their writing and attacks, then I’m afraid there will be a tendency to justify the attacks”, Markovic said.

Branko Radulovic, MP – Democratic Front said journalism was one of the foundations for a free and democratic society.

“Equality of treatment should be one of the basic principles of work. Montenegro is a partitocratic state and many may be Dusko Jovanovic’s killer. There is no statute of limitations on attacking journalists, it cannot be”, Radulovic said.

Mihailo Andjsic, MP – DPS asked what the concrete next steps are in terms of the attack on Olivera Lakic, so that the situation would not last too long.

Assistant Director of the Police Directorate Enes Bakovic replied to Andjusic that a dedicated case was underway.

“A complex case that did not leave much material evidence on the spot. We hope to find out about the immediate perpetrator of this crime”, Bakovic said.