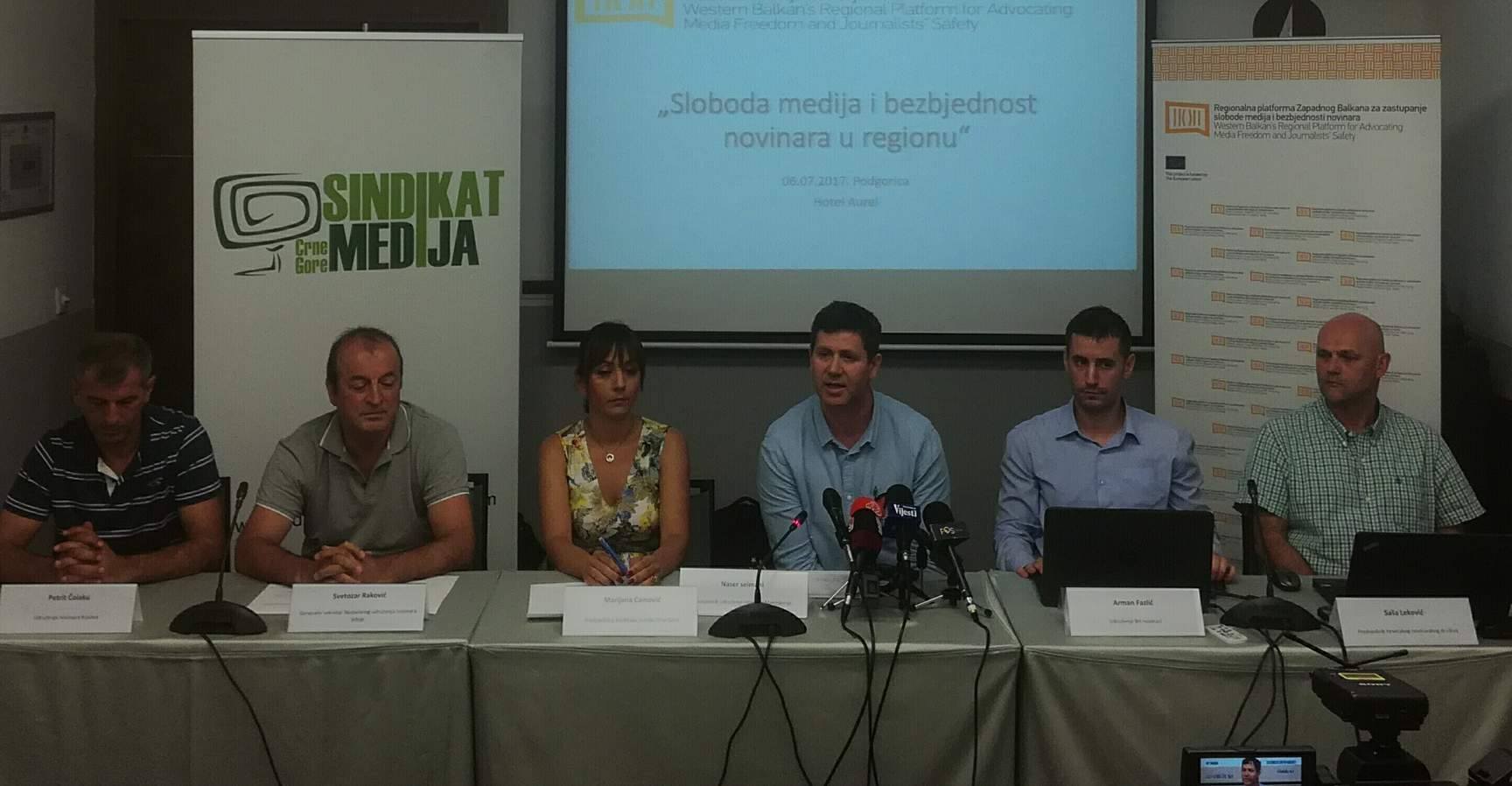 „Media freedom and safety of journalists are at risk in the whole region and attacks against journalists and media should be considered to be attacks against all citizens.“ That was said at the Media Conference for media organizations representatives from six West Balkan countries in Podgorica.

Saša Leković, president of Croatian Journalists’ Association (CJA), said that many attacks against journalists and even several murders have been reported in the region, including murder of Duško Jovanović, editor of Podgorica daily Dan.

On behalf of regional journalist organizations Leković said that attacks against journalists concern all citizens.

All data about attacks against journalists at single web page

Arman Fazlić, representative of Association of BH Journalists, said that web platform is primarily aimed to victims of attacks – they can report about attacks through the platform. But is also valuable tool for all journalists, media workers and civil activists who investigate cases of attacked journalists.

Naser Selmani, president of Association of Journalists of Macedonia, pointed out that impunity of attacking journalists was the major problem. „The system produces impunity for its own interest“, he said. He added that there even police attacks against journalists in Macedonia were reported, the same police that is supposed to protect citizens. Selmani added that new Macedonian Government declared that practice was about to be changed.

Svetozar Raković, secretary general of Independent Journalists’ Association of Serbia, confirmed the fact that key reason for attacks against journalists came from political sphere. He said that in past few years the highest state officials were directly insulting journalists during press conferences and due to that the general public perceived that behavior as acceptable. Speaking of other kinds of pressure against Serbian journalists Raković pointed out juridical system – it is very quick in cases officials versus journalists but very slow in cases journalists versus representatives of administration.

Work of journalists is uncertain and underpaid, while level of censorship is high

Petrit Čolaku from Association of Journalists of Kosovo said that the biggest problems at Kosovo are lack of working agreement for journalists, late payments and censorship. „But there are some positive changes“, he added. „For example, in March this year Kosovo State Attorney accepted Association of Journalists of Kosovo claim to appoint specific person at its Office to co-ordinate cases of attack against journalists.

Marijana Camović, president of Trade Union of Media Montenegro, commented the results of research done by organizations constituting this Regional Platform. The research shows that in all countries of the region journalist jobs are not stable and more then half of interviewed journalists found that the economic situation is deteriorating.

Journalists have different approaches to free access to information. They use access in BiH and Serbia, but not that much in Montenegro and Macedonia. Even 78% interviewed journalists at Kosovo pointed out that institutions refused to give them documents they asked for. That percentage is lower in other regional countries, but still rather high.

Representatives of West Balkan Regional Platform will stay in Podgorica until July 7 for training in developing capacities to advocate.

More about the project at safejournalists.net.