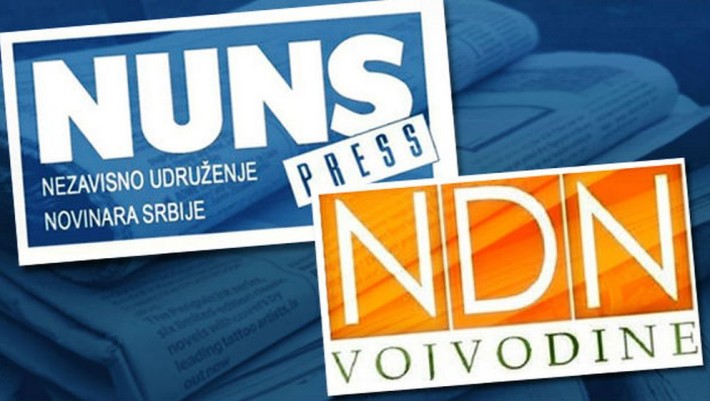 It is especially indicative that attacks on “unsuitable” journalists and almost open calls for lynching escalated immediately after the international delegation, composed of the representatives of the European Federation of Journalists (EFJ), the International Press Institute (IPI) and the South East Europe Media Organisation (SEEMO) that visited Belgrade to establish the real state of media freedom and safety of journalists.
NUNS and NDNV believe that the schizophrenic reaction against journalists was due to findings of an international mission that the state of media freedom in Serbia is very bad. Particularly worrying is the fact that attacks were frequent despite Serbian President Aleksandar Vucic’s promise to members of the international mission “to defend the freedom of the media without conditions”.

At the end of the visit to Belgrade, Mogens Blicher Bjerregård , president of EFJ, stated that there are many pressures and threats against journalists in Serbia, and that President Vucic must support the freedom of the media before it is too late.

At pro-government tabloid television with national frequency, TV PINK, Dragan Vucicevic, the editor-in-chief of the pro-government tabloid Informer, yesterday accused the journalist Tamara Skrozza and the Vreme weekly of creating an atmosphere of chaos before the upcoming Belgrade Assembly elections just so they could claim election theft after, and that they work in the interest of Miroslav Miskovic, a businessman. The use of Skrozza’s half sentences stated in a satirical show taken out of context, in TV Pink recognizable professional manner, targeted a respected journalist as an archenemy of Aleksander Vucic.

In the same TV programme, Vucicevic stated a lie that the editor-in-chief of the Beta agency, Dragan Janjic, openly accused Serbian President Aleksandar Vucic of murdering Oliver Ivanovic, local Kosovo politician of Serbian nationality shot on 16.01.2017 in Kosovska Mitrovica. We remind the public that such false accusations were the reason for the still on-going 9 days long horrendous campaign against Dragan Janjić on social networks calling for his expulsion from Serbia and murder.

Predrag Sarapa and Vucicevic, the hosts of the TV PINK show, insulted the president of the NUNS, Slavisa Lekic, and disparaged the daily newspaper Danas calling it a “CIA daily”. Vucicevic accused CRTA and other non-governmental organizations of being mercenaries of the US Embassy, USAID, and the US businessmen Rockefeller and Soros and, using the most primitive rhetoric mocked the opposition party leaders and other prominent public figures, known for their critical views about the current government.

For two days on the Informer website and other far right websites, a real persecution is taking place against Una Hajdari, journalist from Kosovo and an associate of the international organization Reporters Without Borders, because of her humorous tweet from the President of Serbia press conference during his visit to northern Kosovo. Hajdari’s photograph was published and she was called a ‘hater of all that’s Serbian and Vucic’. As soon as this enflaming article was published, Hajdari received insults and serious threats through social networks.