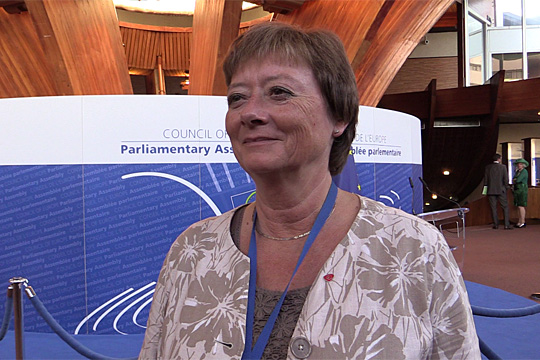 At the meeting Selmani and the delegation members discussed the political developments after the parliamentary elections and the implementation of the Resolution 1949 adopted in 2013, for a post-monitoring dialogue with Macedonia and the progress in terms of cooperation with the Council of Europe.

At the meeting, Selmani said that the political crisis in Macedonia which escalated into violence should not be surprising because the Macedonian political establishment, which has roots from the time of communism, since the first day of the independence permanently refuses to democratize and implement basic democratic principles provided in the Constitution.

Selmani believes that the system showed the ugly face during the reign of Gruevski, who battled brutally with the media.

He said the the system, controls the media by implementing the strategy of carrot and stick, those who promote the policies of the government are rewarded with public money, while it battles brutally with critical media. He reminded that in Macedonia the journalists are exposed to persecution in order to punish those who don’t listen and discipline the others. Moreover, AJM in the last 4 years has registered around 50 attacks on journalists and none of the attackers have been brought to justice. The message is very clear, beat journalists and you will not be judged for that, said Selmani.

He explained to the guests from Strasbourg that the government corrupts the media with public money. Although the government stopped spending money on media campaigns, corrupt practices continue through the system of allegedly sponsoring domestic production on the national televisions. A part of the corrupt system are the public and state institutions, as well as the municipalities that spend money to fund media in order to bribe their affection.

He asked from the guest to call the new government to abandon the idea at the first government session to revoke the broadcasting fee because such a measure is contrary to the standards of the Council of Europe. According to him, the AJM insists on bringing a sustainable solution for the Macedonian Radio-Television, which will be the product of serious public debate.

Association of Journalist of Macedonia