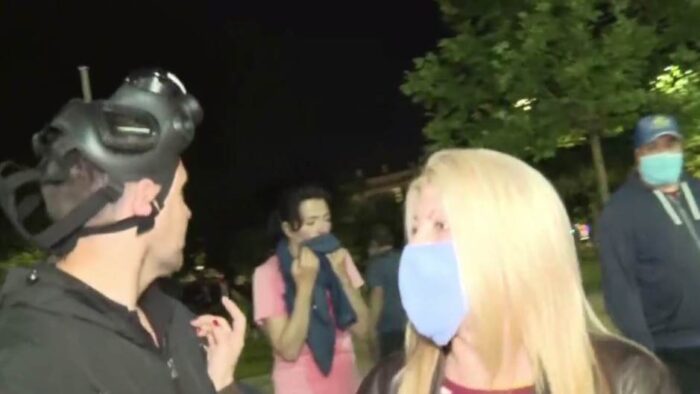 Two cameramen were physically assaulted by protesters, one journalist hit with the baton and police prohibited journalists from filming violence during street protests in Belgrade, Serbia.

On the evening of July, 7 citizens of Belgrade took to the street to protest against the way Serbian Government handles the Covid-19 pandemic. As clashes between protesters and the police escalated, minimum three incidents against journalists were recorded:

Videos of three incidents can be found online.

– Last night the police force used excessive force on citizens, some protesters were violent and in such an extreme environment journalists were attacked. We call on police to pay attention and protect media crews and our colleagues to wear press cards and avoid situations that could endanger their safety – said Zeljko Bodrozic, president of the Independent Journalists Association of Serbia (IJAS). Bodrozic expressed regrets that RTS, Serbia public service, failed to inform citizens of Serbia about the dramatic events that unfolded and added – I’d like to highlight media crews of TV N1, Al Jazeera Balkans, Nova porta, Danas daily and other professional media who courageously reported about the events providing timely and objective information about the protests to citizens of Serbia and the region.

SafeJournalists Network, representing more than 8,200 media professionals in the Western Balkans, condemns all violence against journalists and joins its member IJAS in its requests to the Serbian authorities. In accordance with its mandate, the police must secure a safe working environment for journalists and must determine who and why violated journalists’ rights during the protests. It must determine whether the police powers were exceeded and if so, the persons responsible must be processed.

We also join IJAS in its call to journalists who report from protests to be visibly marked – their press IDs should be on a visible place and they must do whatever possible in the given circumstances to identify themselves to the police and citizens as journalists on duty.