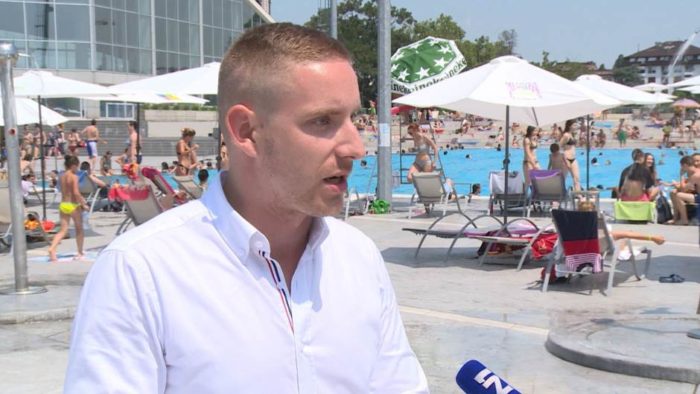 BELGRADE, 04.07.2019. – A senior staff member of a central Belgrade sports center was censored on the air twice on Wednesday by reporters for the pro-government TV Pink and the Serbian state TV (RTS) for mentioning the city’s deputy mayor Goran Vesic.

Uros Markovic, a staff member at the Milan Gale Muskatirovic sports center, was first censored on TV Pink when he started to say that Deputy Mayor Vesic wanted to take over the center and its pools but was told by the reporter that he couldn’t say that. When he tried to repeat what he wanted to say about Vesic the reporter took away the microphone and ended the live report.

Markovic was interviewed on the air four hours later by an RTS reporter but when he started to talk about how Vesic wanted to take away the sports center he was told that he shouldn’t talk about that.

N1 interviewed him later in the day and he said that he heard both the TV Pink and RTS reporters get instructions from their editors to stop him from talking. “I heard clearly from their headphones when both reporters were told to end their live reports,” he said.

Asked what he wanted to say about Vesic and the city authorities, Markovic said he wanted to talk about the attempts to take over the sports center. “That is just the culmination of everything that happened to the Stari Grad municipality including a drastic reduction of powers, of the budget, taking away office space. All that is punishment for the Stari Grad residents, that is for everyone who did not vote for the Serbian Progressive Party (SNS),” he said.

Independent Journalists Association of Serbia (NUNS) President Zeljko Bodrozic said this was an opportunity to see censorship and self-censorship. “Our TV stations with national coverage allow a lot of bad language, racial and religious intolerance to go on the air and their journalists mainly do not react but we see here that the program is interrupted as soon as someone in power is mentioned,” he said.

The NUNS recalled that there has been speculation in the media that the city authorities want to take away the sports center from the municipal authorities which is a story of public interest which should be reported.