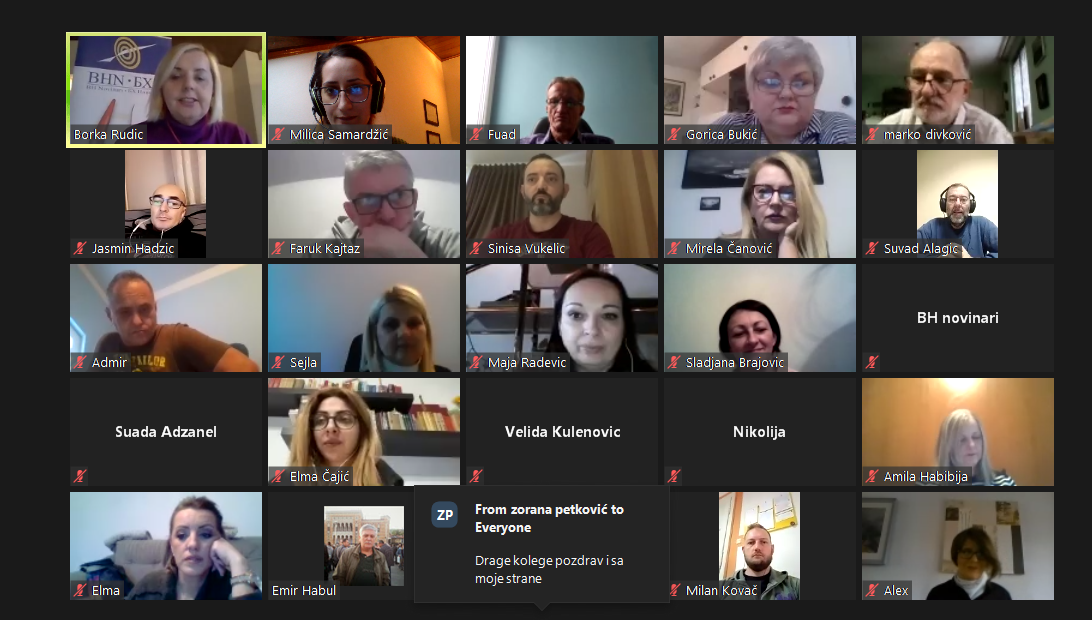 SARAJEVO, 15.01.2021. – At least 500 journalists from all over Bosnia and Herzegovina in the past three years have used the services of the Free Media Help Line (FMHL), a free legal service that operates within the BH Journalists Association. In the same period, 165 new cases were reported and resolved through the FMHL, including about 30 cases from previous years for which there are no final decisions or solutions in favor of journalists and media – this was pointed out at the Reporting Assembly of the BH Journalists Association, which was held today via Zoom platform.

In the last three years, BH Journalists have organized a total of 91 events with 2,446 participants, including 163 representatives of local authorities and 1,470 representatives of international and non-governmental organizations, public institutions and other associations. An important part of the Association’s activities in the past period was the development of amendments to criminal laws in BiH, with the aim of improving the efficiency of judicial institutions in processing attacks on journalists and sanctioning attackers. In May 2019, these amendments were submitted to the authorities at the state, entity and Brcko District levels, but there is still no adequate response to the proposals of BHJA.

In the past year marked by the COVID-19 pandemic, BH Journalists were dedicated to services and activities that were supposed to facilitate the work of journalists and the media, among which free psychological support to journalists, bloggers, freelancers and other media workers throughout BiH in cooperation with psychologists’ associations from Sarajevo Canton and Republika Srpska, and with three clinical psychologists – therapists from Banja Luka, Mostar and Sarajevo, was especially important. In the period from May to the end of December 2020, three group therapeutic sessions were held with media employees from Sarajevo and Mostar, as well as 158 individual therapies. The beneficiaries of psychological support were journalists from various media and most of them asked for help due to professional fatigue and stress, as well as the negative consequences of the coronavirus pandemic on mental health.

A significant part of the activities of BH Journalists was aimed at protecting the copyrights of media professionals and strengthening the position of women journalists in the media and their protection in cases of gender-based and online violence. Three years ago the Network of Female Journalists in BiH was established, which today has 170 members from all over the country. The Network’s activities are aimed, among other things, at strengthening the capacity of female journalists to more effectively protect freedom of expression and other women’s human rights in the media, improving the knowledge of journalists, journalism students and other media professionals about gender policies, equality of editorial and managerial positions and raising public awareness of the need to more effectively protect the rights of female journalists. In the reporting period, BH Journalists initiated and participated in a number of other project activities of importance to the media and journalists, including the Media and Public Credibility project, launched to promote transparency of media ownership, then JUFREX project, through which journalists and editors together with representatives of judicial institutions are trying to improve the legal framework and judicial practice when it comes to cases related to the media, Journalism Academy, intended primarily for the education of young journalists through summer and winter camps …

Finally, it should be said that BH Journalists are one of the few journalist associations in BiH and the region that have developed strong research capacities and formed a network of researchers and experts on media freedoms and responsible journalism. Thanks to this, 21 thematic analysis/surveys/ monitoring have been conducted in the past three years, with the participation of at least 3,000 media professionals and representatives of civil society, vulnerable and minority groups.

At today’s Reporting Assembly, the delegates also discussed the work of the clubs of journalists in BiH and the Steering Committee of the Association and approved the plan of work and activities for 2021.