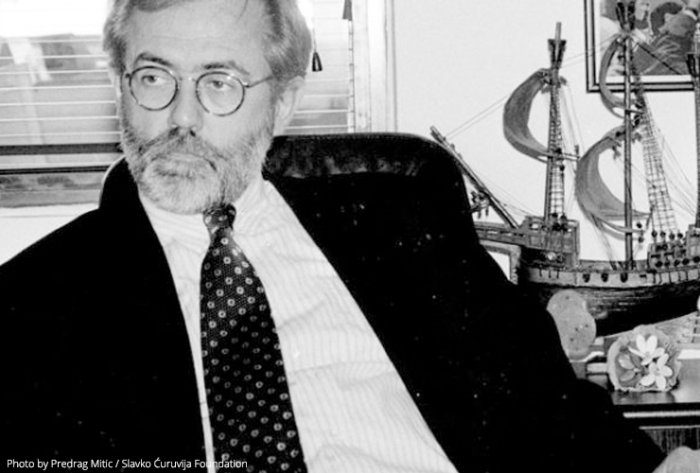 The International Press Institute (IPI), a global network of editors, media executives and leading journalists for press freedom, today expressed dismay after a court in Belgrade overturned the convictions of those found guilty of the 1999 murder of Serbian journalist Slavko Ćuruvija and ordered a retrial.

Ćuruvija, an investigative reporter, owner of the Dnevni Telegraf newspaper and Evropljanin magazine, and a vocal opponent of authoritarian president Slobodan Milošević, was shot 14 times with an automatic pistol outside his house in Belgrade.

In April 2019, four former spies working for the State Security Department in the former Yugoslavia were convicted for the killing and each sentenced to between 20 and 30 years in prison, in a landmark ruling for impunity and press freedom.

Now, the Special Department for Organized Crime of the Court of Appeals in Belgrade has ruled to overturn the first-instance verdict and return the case to court for a retrial, prolonging a 21-year fight for justice.

In its justification, the Court said the appeal was accepted due to a “significant violation of the provisions of the criminal procedure” regarding the decision to find all four suspects guilty, while leaving who ultimately pulled the trigger unnamed.

In the initial verdict, two alleged hitmen were named as “accomplices”, though who actually executed the murder was recorded by the Court as an “unidentified person” due to a lack of sufficient evidence.

The Appeal Court’s decision, published on September 7, said that not identifying the “direct perpetrator” was “contradictory” and not “sufficiently clear” and that the retrial would aim to eliminate “deficiencies and violations” surrounding the issue.

Ivana Stevanovic, of the Slavko Ćuruvija Foundation, an organization set up in the journalist’s name that has long fought for justice, expressed disappointment and told IPI that it was uncertain how long the process would take, as it was currently unclear whether the retrial would re-examine evidence about the “unknown person” partially or in full.

Slobodan Ruzic, the attorney of Slavko Curuvija’s family, said he hoped the retrial would deal with the shortcomings raised by the Court but ultimately confirm the first-instance conviction. “I expect that the repeated procedure will not last long and I expect that a conviction will be passed again”, he told the Beta agency. He added: “Of course, the injured party and I, as their attorney, are not happy about this decision.”

Scott Griffen, IPI’s deputy director, said: “This decision underscores how incredibly difficult it is to achieve full justice for the killing of journalists in Serbia. This retrial could foreseeably take many months or even years, further delaying justice and prolonging closure for the family.

“With the first trial marked by controversial decisions, allegations of government obstruction and threats against investigators and witnesses, any new trial is also likely to be equally as politicized and problematic. We hope that the court will render a conviction again without undue delay and that those who ordered, planned and committed the murder of Slavko Ćuruvija to finally be sent to prison. The fight for impunity – in Serbia and around the world – remains an uphill one, but it must go on.”

Veran Matić, president of the Commission for the Investigation of the Murders of Journalists in Serbia, also expressed disappointment at the decision and said he expected the new trial to be “short-lived”.

The ruling followed a special three-day hearing from July 7 to 9 where a panel of judges heard arguments from both legal teams. The retrial represents a victory for the defense attorneys of the accused, who had long sought to force a re-examination of the evidence.

However, the retrial was also requested by the deputy prosecutor for organized crime, Milenko Mandić, who achieved the initial conviction. Despite the prosecutor’s requests largely being met and heavy sentences being handed down by the court, Mandić appealed to resolve the “unknown person” dispute and attain a definitive verdict on which of the two assassins identified as being at the murder scene pulled the trigger.

After the July hearing, the Court could either have upheld the judgment, changed the verdict itself, or approved the appeal and sent it back for retrial.

Stevanovic told IPI that neither Curuvija’s family nor their legal team had been informed by the Court about its decision, which was published on its website without advance warning, and instead found about through media reports. No statement was issued by the Court about the ruling. Rather than publish a full explanation for the decision, it published a summary on its website. The full documents will be sent to stakeholders.

In the first verdict, the Court said Markovic had told Radonjic of plans to murder the journalist and that Radonjic then conspired with Romic and Kurak to carry out the killing.

In the initial verdict, the court also said an “unknown person” had ordered the hit. Curuvija’s family have in the past accused Milosevic, who died in 2006. The stated motive for the murder in the now overturned convictions was Ćuruvija’s “public appearance in the country and abroad and criticism of the holder of political power, and in order to preserve the existing structure of power”.

This statement by IPI is part of the Media Freedom Rapid Response (MFRR), a Europe-wide mechanism which tracks, monitors and responds to violations of press and media freedom in EU Member States and Candidate Countries.