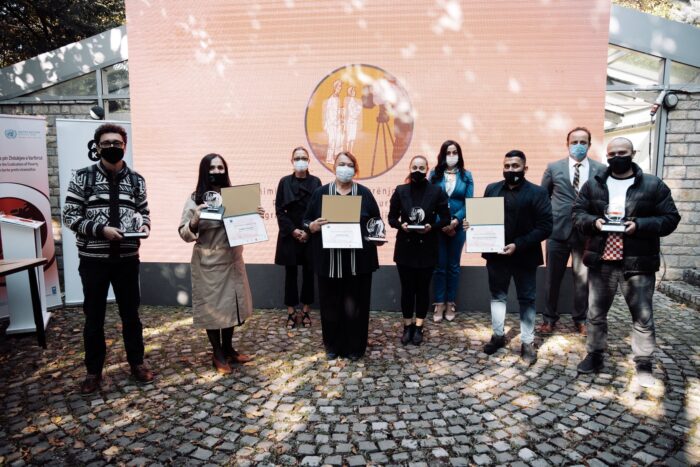 PRISTINA, 20.10.2020 – The Association of Journalists of Kosovo (AJK), in partnership with the United Nations agencies in Kosovo (UNKT), under the coordination of the UN Development Coordinator’s Office, Ulrika Richardson, today held the 15th edition of the best annual journalism awards aimed to eradicate the poverty.

Nora Xhuzi and the cameraman Edon Gërbani of Radio Television of Kosovo, were awarded for the “Best short video story” by the Head of the UN Women Office in Kosovo, Vlora Tuzi Nushi.

The prize for the “Best Short Video Story” was also given to the journalist Angjelka Çup from the portal “Graçanicaonline”. She was awarded by Larissa Bruun, vice Head of the UNICEF Office in Kosovo.

The award for the “Best Written Story” was given to Koha Ditore’s journalist Rexhep Maloku by Maria Suokko, Head of the UNDP Office in Kosovo.

For the category of “Best Television Documentary”, was awarded the journalist Valdete Osmani from Radio Television of Kosovo, and the award was given by Visare Mujko Nimani, Head of the UNFPA Office in Kosovo.

The “Best Photo Prize” was awarded to Valdrin Fetahu from the portal “Gazeta Objektiv”, an award which was given by Blerim Azizi, Coordinator of the UN Volenteers Office in Kosovo.

In addition to the awards ceremony, the participants were also addressed by the President of the Association of Journalists of Kosovo, Gentiana Begolli Pustina and the United Nations Development Coordinator, Ulrika Richardson.

The president of AJK, Begolli Pustina, during her speech said that the pandemic paralyzed many things this year, the economy, production, social life, but that was not the case with the work of journalists. According to her, our colleagues, apart from being on the front-line reporting from overcrowded hospitals, did not for a moment neglect reporting for those who barely survive poverty.

“These are not just stories of individual cases, but strong messages about the urgent need for the state to prove that they care about this category. Perhaps, with a few euros in their pockets themselves, many journalists covered the real story of Kosovo, the one that not all of us see up close. Their voice would be silent and we would not hear it even today, without the extraordinary commitment of our colleagues from all ethnicities living in Kosovo”, she declared.

While, in her speech, Ulirika Richardson – United Nations Development Coordinator, emphasized the importance of discussing poverty, as for the first time in 20 years, the poverty rate will increase because of the COVID 19 pandemic.

“We are here today to celebrate the work you journalists do, emphasizing the ones who report on poverty … It is very important to discuss, hear and see stories about poverty. This draws our attention, because it proves to us how difficult it is to fight poverty, since as we saw, you cannot feed the family with two euros a day. The COVID 19 pandemic has exposed the vulnerable side of our society and especially our social services, so it is very important to talk about it, because if we do not talk about it we risk to forget the people whom live in poverty and the reasons why they live in poverty”, said Richardson.

At the end of the ceremony, Begolli Pustina, congratulated the colleagues for the awards they won and at the same time on behalf of AJK and the community of journalists, cameramen and photojournalists, expressed the heartfelt gratitude to the United Nations agencies in Kosovo led by Ulirika Richardson, which for 15 years in a row stood by journalists, not only in defending their freedoms and rights, but also in encouraging and rewarding their work.

Today’s event was held in honor of the International Day for the Eradication of Poverty on October 17th, which was designated by United Nations Resolution adopted on December 2nd, 1992 by the UN General Assembly. 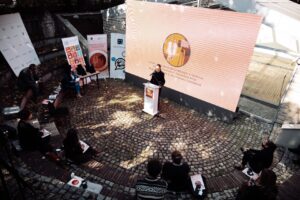 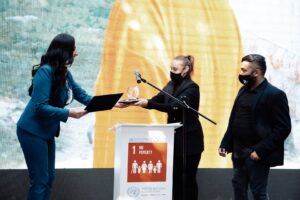 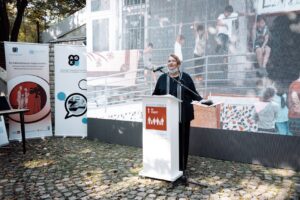 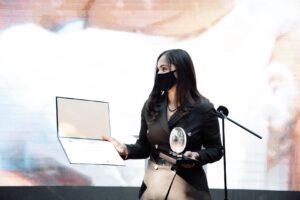 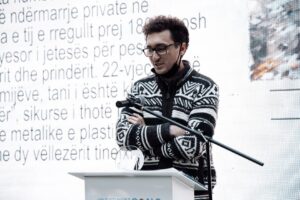 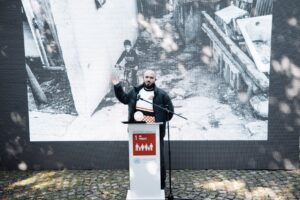 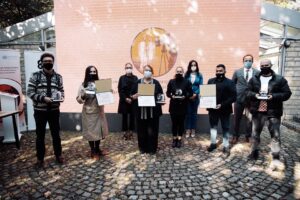