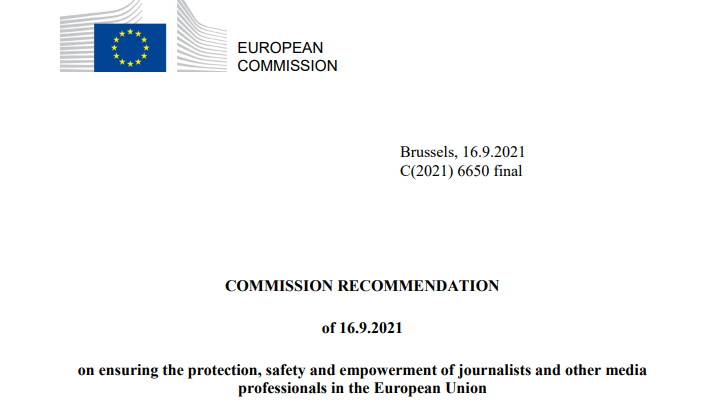 PODGORICA, 24.09.2021. – Several murders of journalists in the European Union in recent years, as many as 900 attacks on them during 2020, more and more SLAPP lawsuits and online threats have led the European Commission (EC) to make recommendations to EU member states to protect responsible journalism and preserve media independence.

In its recommendations, the EC calls for the creation of independent national support services, which would include helplines, legal advice, psychological support and shelters for media workers facing threats.

Members are also advised to encourage better cooperation between law enforcement agencies and the media, educate media employees on social protection and provide personal protection to journalists whose safety is endangered.

It is crucial, according to the European Commission, that there is no discrimination against the media, and that everyone has equal access to information, press conferences and government documents.

Working together with journalists’ representatives is necessary, according to the EC’s recommendations, in order to adopt appropriate protection measures when reporting on protests, such as the visual identification of media employees.

According to the EC, digital or online security has become the main concern of journalists due to the spread of hate speech, receiving threats of physical attacks, but also the risks related to online security and illegal surveillance.

Relevant national authorities should, on the advice of the Commission, assist journalists when requesting a threat check for their devices or online accounts.

According to the European Commission, online threats are on the rise across the EU, with women and members of minority groups working in the media being the most exposed. These groups, they say, are particularly vulnerable to threats and attacks. It is especially worrying when such attacks are initiated by politicians or powerful public figures, the Commission points out.

As part of that plan, the Commission is announcing a European law on media freedom next year, which should protect the independence of the media.