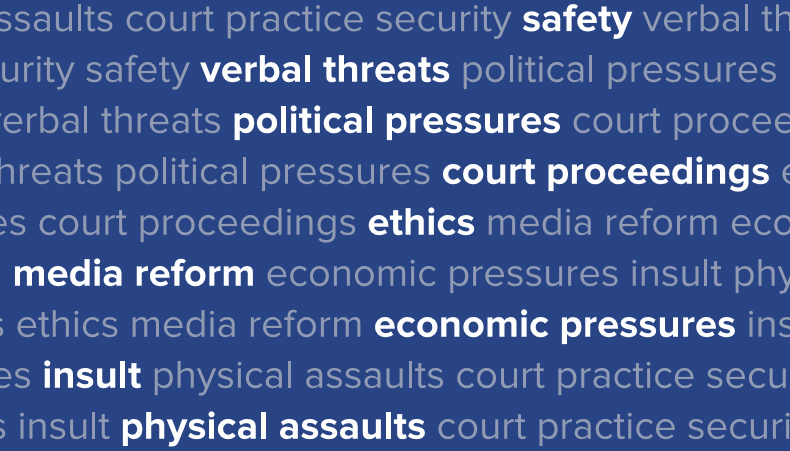 IJAS’s database of attacks and pressures against journalists on 5.12.2017.

At the end of December 2016, an Agreement on cooperation and measures to raise level of journalists’ safety between Serbian Ministry of the Interior, Republic Public Prosecutor’s Office, and seven journalists’ and media associations was signed. This Agreement was foreseen by the Action plan for Chapter 23 in the process of accession to the European Union, with the basic goal of establishment of a system of measures to ensure more efficient criminal and legal protection of journalists. As a result a Standing Working Group was established, but year later no serious developments have taken place in the area of improving of safety and security of journalists. Despite better communication and information exchange, the special recording of attacks on journalists and newsletters sent by the Prosecutor’s office, out of 30 recorded cases, as many as 23 are still in pre-investigative proceedings; in 3 cases it was established that there were no elements of a criminal offence to be prosecuted ex officio, that is, that there were no grounds for prosecution; while in 4 cases criminal charges were dismissed.*

This year was also marked with a decision made by the First Basic Prosecutor’s Office in Belgrade to dismiss criminal charges made by journalists attacked in the during inauguration of the president of Republic of Serbia, Aleksandar Vučić. Dissatisfied with the stated justification IJAS with Independent Journalists Association of Vojvodina (IJAV) and Association of Independent Electronic Media (ANEM) requested an urgent meeting with the Republic public prosecutor Zagorka Dolovac. Reacting to this Prosecutor’s decision, Media Association and Association of On-line Media suspended their participation in the Standing Working Group, while IJAS, IJAV and ANEM stated that they would decide about their status in the Standing working group after the meeting.  Without debating the Prosecutor’s decision, the associations found its justification disputable – it stated that by taking journalists out of the mass a larger incident was prevented, including their “lynch” and serious bodily harm of the event participants. It also stated that individuals who participated in it “behaved politely, had not threatened anyone but kept appealing to stop with provocations”.

Murders and physical attacks on journalists

Despite the work of the Commission to Investigate the Murders of Journalists in 2017 three murders of journalists have not been resolved (Vujasinović, Ćuruvija and Pantić), nor one assassination attempt (Anastasijević) and many cases of severe attacks from previous years (Pašalić in 2014 and Ninić in 2015).

In the period from 01 January to 05 December 2017, the number of pressures recorded in the database kept by IJAS amounted to 54, while throughout 2016 that number was 33. The pressures include: harassment of journalists, different forms of pressures exerted by state officials, politicians and other persons in positions of power, cases of restricting attendance or selective invitation of journalists to various public events, as well as pressures of pro-governmental media against journalists and media outlets which are likely to be critical of authorities. Analysis of the database shows that a large number of cases include pressures exerted by public officials, i.e. by representatives of authorities, from top state officials, to representatives of local authorities. Pressures are often concealed, but it needs to be emphasized that, regardless of their form, pressures affect journalists and their work and put a question mark over their safety; in a broader context, they represent violation of media freedoms. The most frequent targets of pressures are media outlets and journalists critical of the work of the government, ministers, and other state officials and local self-government units. Such pressures are continuous and most are increasingly targeting journalists of TV N1, the Danas daily and non-profit media active in the investigative journalism (CINS, KRIK and BIRN).

Local journalists are also exposed to various forms of political and economic pressures, which threaten survival of their media outlets. Such was the case of the Vranjske weekly that was closed after 23 years of existence. Other cases include administrative harassment of the media through unjustified, long and exhaustive inspection visits, eviction from the premises, etc.

In 2017 IJAS recorded cases of discrimination through restriction of reporting from certain places, exclusion of individual journalists / media from public events, as well as the refusal of representatives of the authorities at different levels to respond to media questions. Such behaviour of representatives of authorities also presents violation of freedom of information, because persons on public functions are obliged to treat journalists responsibly and without any discrimination.

Pressures against journalists through court procedures

An illustrative example pressures through court procedures is the case of Nebojša Stefanović, minister of the interior, versus NIN weekly because of the article “Chief phantom of Savamala”*. After a single hearing, scheduled four months after the charges were filed; the case against NIN was resolved unusually fast and in favour of the Minister. The Higher Court in Belgrade pronounced that a verdict against NIN, obliging it to pay 300,000 rsd (approx. 2,500 EURO) as non-pecuniary damages. However, the Belgrade Court of Appeals modified the first-instance verdict and rejected the minister’s claim, believing that the Higher Court misinterpreted the Law on Public Information and Media.

This case may be characterized as a form of pressure against media, especially having in mind the social role and importance of media and practice of the European Court of Human Rights. The practice of awarding high damages by media, such as the case of the Autonomija.info portal, also present a pressure on media, since it endangers their economic viability.

Wars among journalists and persecution of individual journalists in certain media additionally escalated in 2017. It is difficult to even list all attacks, accusations, campaigns and constructs by journalists of tabloid media addressed to their colleagues, putting them in physical danger and exposing them to risk of continual defamation and discrediting. This affects not only journalists, but also their family members. A different type of attacks against journalists are more professional, considerably more elegant than those by tabloid ones, and are addressed to different or other media audience, but bear long-term danger for journalists they are targeting.

In addition to these topics, the Chronicle focuses on other areas, such are Co-financing of public interest in public information and the Regulatory body for electronic media.

For more information about cases and trends, please see Chronicle of attacks and pressures against journalists 2017 that was published in cooperation with Civil Rights Defenders and with financial support from the Swedish International Development Agency.

*Upon completion of the publication, IJAS was informed that the case of the threat to Slavisa Lekic and his father was solved by ordering  security measures and compulsory psychiatric treatment at of the perpetrator