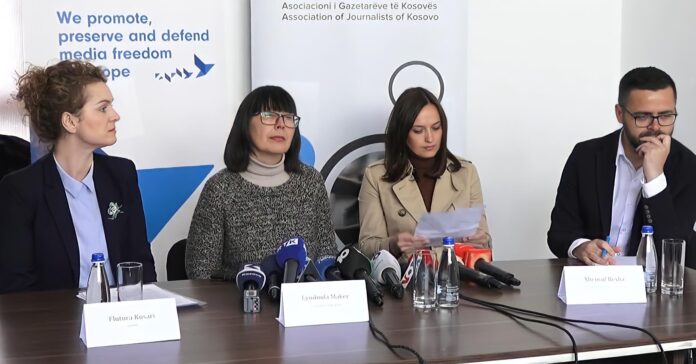 Lyudmila Makey – Ukrainian journalist, Chairman of the Board of AJK, Xhemajl Rexha, and the Legal Advisor at ECPMF, Flutura Kusari, today organized a conference regarding the launching of the project “Journalists in Residence – Kosovo ”, which envisages the arrival of 20 Ukrainian Journalists in Kosovo.

Makey expressed gratitude for the support given by Kosovo, as well as the solidarity of journalists for the war in Ukraine.

“As soon as I got off the plane I felt the sincerity and hospitality of the people who welcomed me … I was very impressed by how the pain of my country is felt by heart by the people of Kosovo. I am grateful to the Government of Kosovo for supporting the people of Ukraine in such a difficult moment, as well as the solidarity of colleagues from Kosovo because it is very important for the world to hear about Ukraine,” she said at the press conference organized by AJK.

Makey also stressed that she feels honored to represent the Union of Journalists of Ukraine, which has over 16,000 members and also to the given the opportunity to report from Kosovo.

“I am sincerely grateful for the opportunity to become the first Ukrainian journalist to come to Kosovo. For me, this is a good opportunity to remain in the profession and get to know fellow journalists in Kosovo.”

Chairman of the Board of AJK, Xhemajl Rexha, said that he is proud of the work that has been done so far to accommodate colleagues from Ukraine, as well as the will of colleagues and media from Kosovo to provide workspace for journalists who will come to Kosovo.

“AJK’s offices will serve for the first Ukrainian journalists that will come to Kosovo, at the meantime we thank all the colleagues and other media that have expressed readiness to provide working spaces for colleagues from Ukraine. This is a very important project for AJK, it is solidarity in action and I am very proud of the work that has been done and will be done, and also with all the will of journalists, colleagues to help journalists from Ukraine”, he said.

Flutura Kusari from ECPMF, stressed that in addition to the budget allocated for accommodation, monthly expenses, and travel, colleagues from Ukraine were also provided with Albanian language courses and medical and psycho-social services.

“With the budget that has been allocated, which is 150 thousand euros for six months, journalists who will come to Kosovo will receive 500 euros per month for monthly expenses, 300 euros for rent, and about 1 thousand euros for travel to come to Kosovo, and to return to their country when the time comes. We have also provided medical services, psycho-social services, Albanian language courses, and integration courses. I want to thank also AJK and other media that have provided offices and newsrooms where journalists can work “, said Kusari.

She also said that the main role of the ECPMF and the European Federation of Journalists is to verify journalists who apply to be part of the program “Journalists in Residence”.

“The main role of the European Centre for Press and Media Freedom, and the EFJ, is to accept and verify the applications of journalists from Ukraine. We want to make sure that the journalists who come to Kosovo are journalists who know each other in Ukraine, and we are doing this in cooperation with the two Journalists’ Unions in Ukraine”.

“Journalists in Residence in Kosovo”, is a program established by the European Centre for Press and Media Freedom (ECPMF) and the European Federation of Journalists (EFJ), funded and supported by the Kosovo government.

The program is being implemented by the Association of Journalists of Kosovo with the support of the OSCE and the European Endowment for Democracy, as well as in cooperation with the two journalists’ unions in Ukraine.